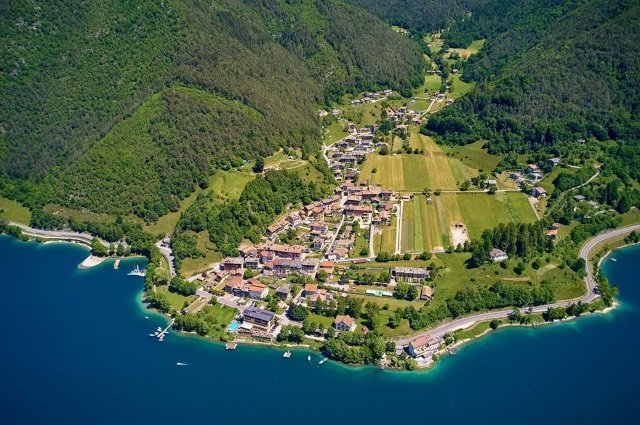 The Ledro Valley is located in the province of Trento and occupies the area between the lake of the same name and that of Garda.

The average altitude of the area is around 650 meters above sea level and is punctuated by several localities which since 2010 have merged into a single ad-hoc municipality: Ledro.
The lake, which has an area of just over two square kilometers, is what can be defined as a small jewel: it is not just one very clean body of water, but it is also an archaeological site of great importance because important prehistoric finds have been found on a part of its banks.

The stay in the Valley, in one of the six former municipalities that make up Ledro, offers numerous opportunities for recreation, relaxation and sport, both in winter and in summer. The slopes of the mountains, too steep, do not allow classic skiing, but the more daring can practice mountaineering skiing by climbing the peaks of Tremalzo, Caret or Parì and then plunging into a breathtaking descent. Green light for other winter activities such as cross-country skiing, snowshoeing, ice skating and dog sledding.
The days are animated by the classics Trentino markets during the month of December and numerous events in January and February, while to warm up there is nothing better than to sit down at the table in one of the many restaurants in the area and taste the typical dishes of the Valley that are a little different from the classic ones of the region. Here you can eat special appetizers such as caponecs, potato polenta and sweets such as Bohemian gnocchi that recall the period of deportation of the inhabitants to Bohemia during the First World War.

In the summer, holidays in Ledro offer a great variety of activities. Of great interest are the numerous paths for walking and trekking. Lazy people can choose to explore the valley floor, perhaps along the shores of the lake, while those who want to discover breathtaking views have to choose one of the many CAI paths that lead to the various shelters that dominate the area.
From Tiarno nature lovers can walk to the reserve of Lake Ampola, a small body of water on which man has not intervened in any way and is covered with water lilies and surrounded by reeds where numerous species of birds live. aquatic, reptile and amphibian. Bathing here is prohibited, but it is not in Lake Ledro, which Pieve overlooks. Not only can you swim in complete tranquility because it boasts the cleanest waters in the entire region, but you can also indulge in sailing, windsurfing, canoeing and fishing.
Those who want to experience the thrill of admiring the valley from above can try their hand at paragliding and, to discover the most hidden corners, there is canyoning with which you descend the courses of two streams that flow in deep gorges where it is not possible. to arrive in another way.
If, on the other hand, you prefer a more peaceful activity, there are numerous mountain bike trails, but after a lot of sport you also need moments of relaxation to go shopping and maybe stock up on typical products and then sit at a pub table for an after dinner with friends. .
For a bit of culture, however, there is nothing better than visiting the reconstruction of the pile-dwelling village that stood here in the Bronze Age, a unique museum that is part of the Unesco heritage.