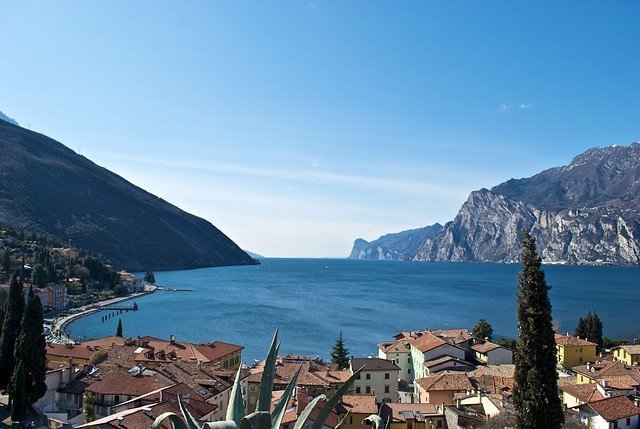 Torbole – Nago are the two villages that make up the well-known municipality on the Trentino shore of Lake Garda.

It has always been a very popular tourist resort for the mild climate that can be defined as Mediterranean despite its latitude. It is no coincidence that Goethe defined Torbole as “the land where lemons bloom”. But there are also wonderful landscapes, extremely varied because its altitude goes from 63 meters up to 2078 meters above sea level. of Mount Altissimo, which is part of the Baldo chain.
With a territory that has mountain, lake and seaside characteristics, the tourist can truly devote himself to any type of activity and the accommodation, sports, shops and places of entertainment and entertainment are numerous, in addition to the various monuments of historical and cultural interest.
In short, Torbole – Nago is a real paradise for tourists.

Thanks to its position, regular winds blow on the waters of the lake facing Torbole which allow you to practice windsurfing and sailing every day of the year and this makes it one of the most popular Italian resorts for lovers of these sports.

However, not everyone can love sailing and so here is a beautiful wide and equipped beach, equipped with services and flanked by the green Pavese Park where you can find refreshment in the shade of the luxuriant plants.
From the small port, on the other hand, you can embark on the ferries to explore the various villages bordering the Benaco.

One of the strengths of the locality are the various walks that can be done on the hills and mountains that surround the locality. Those who are lazy can settle for short routes that in about an hour lead to the Pineta, to the panoramic Monte Corno or along the banks of the Sarca river which flows into the lake right here. Those who love walking, on the other hand, can climb the slopes of Mount Altissimo until they reach its top, or take nature trails or walk along the lake to the nearby Riva.

Absolutely a must is the vision of the Marmitte dei Giganti, rock formations that resemble a sort of wide and shallow wells and which are the result of glacial erosion.
Among the historical and cultural attractions, the Austro-Hungarian Forts should be mentioned, they are well preserved and were built by the Hapsburg Empire after the proclamation of the Kingdom of Italy to defend Trentino from the aggressions of the Savoy. Also interesting is the visit to the ruins of the Penede Castle which is about a thousand years old and there are also numerous churches that contain precious works of art.
There are also numerous opportunities to practice adrenaline sports. In fact, there is a canyoning center, with routes that put athletic skills to the test in the Adventure Park and of course there is no shortage of mountain bike trails, tennis courts, swimming pools and sailing and windsurfing schools.

The free time to relax can instead be spent between shopping and the various entertainment venues and it is a must to indulge in a taste of the typical dishes of the area, then go ahead for “bigoi con le aole” pasta with lake sardines or “le” aole con le onioni “and for dessert there is nothing better than the” de fregoloti “cake which has an almond-based dough.