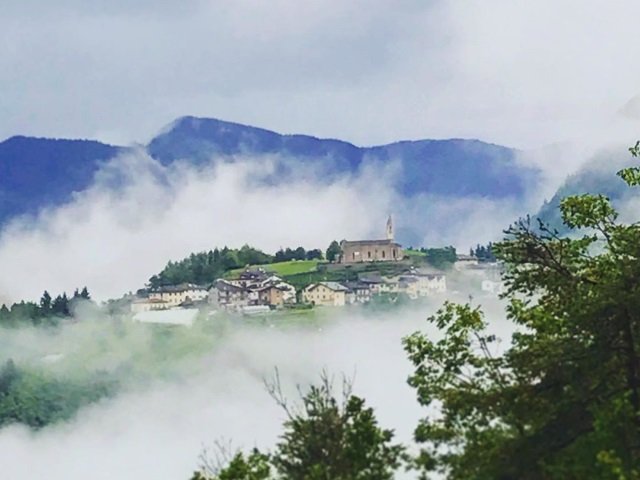 Baselga di Piné is the ideal place for any type of holiday, both in summer and in winter.

Baselga is a town of about five thousand inhabitants which constitutes the tourist, economic and cultural center of the Piné plateau. The place, thanks to the woods and meadows present, the Laghestel biotope, the lake of Piazze and the lake of Serraia, is of great environmental importance.
There are also sites of cultural and artistic interest, such as the Mariano di Montagnaga Sanctuary, which houses the painting of the Madonna del Caravaggio, a seventeenth-century church dedicated to San Giuseppe, the Antica Pieve di Santa Maria Assunta and the ancient church of San Rocco.

The landscape surrounding Baselga di Piné is characterized by woods and meadows surrounded by the peaks of the Lagorai Dolomites, lakes and rolling hills. The landscape is rich in contrasts, thanks to the terraces, on which the vineyards are grown from which the local fine grappas are produced, which occupy the steep slopes and the deep abyss that has been dug over time by the Avisio stream. In the region it is possible to see one of the most particular geological formations in the whole of Trentino, the so-called “omini di segonzan”, or small earth pyramids that were formed thanks to the erosion of the mountains.
The Piné plateau is the ideal place to practice winter sports. But here we are not just talking about skiing (which is also very popular, even at night). In fact, the most popular sporting activity in this area is ice skating, made possible by the presence of numerous lakes which, with very low temperatures, turn into perfect skating rinks. Other activities offered include curling, figure skating, hockey, broomball. The dynamic center of the sporting life of the place is, without a doubt, the Ice Rink Pinè ice stadium, inside which ice can be found even during the summer months.
Those who decide to visit Baselga di Piné during the spring can attend the Free Italian Cup competitions of figure skating, a show much appreciated by people of all ages.
Not only in spring, but also in summer, thanks to the particularly pleasant climate, the area lends itself to being the backdrop for excursions and trekking in search of breathtaking views, long walks in the meadows and woods, and the practice of lagoon sports such as swimming and diving. The lakes in the area, in fact, in addition to having the characteristic of having crystal clear waters, are known for being particularly fishy.
In addition, the ridges of the mountains allow for pleasant excursions on the saddle of a mountain bike.
Mushroom lovers will be pleased to know that this area is known for being home to a very rich mycotic variety.
During the walks it is not uncommon to come across fields where small fruits are grown such as currants, strawberries, raspberries and blackberries, which in the place are tasted both natural and transformed into very tasty jams and marmalades, which make up the typical specialties of Baselga, whose traditional cuisine also includes polenta seasoned with game, sausage, cheeses and yoghurts.