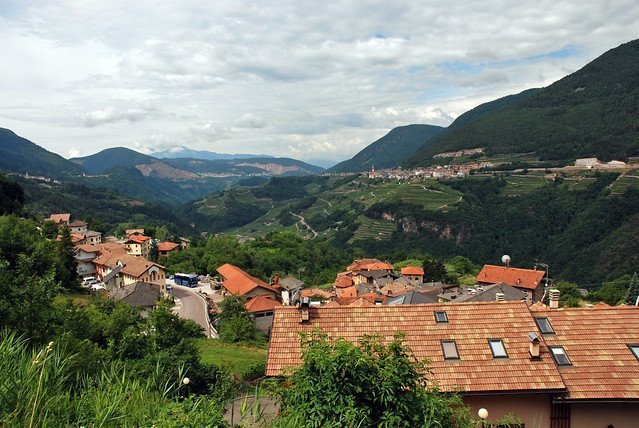 Segonzano is a town of just over 1,500 inhabitants in the province of Trento, about 660 meters high, near the Avisio stream.

Segonzano is a vast area characterized by about fifteen very different hamlets. Famous above all for its pyramids, wonders created by nature, the Segonzano area is dedicated to agriculture, in particular to vineyards, craftsmanship, wood processing and porphyry, a type of volcanic rock.

But Segonzano is also the site of an important historical event: here in fact the battle against the French took place which decreed the first defeat of the Napoleonic army in 1796.

The result of water erosion dating back to the last ice age, the famous pyramids are a natural attraction not only worldwide. The stone columns are about 20 meters high arranged in a position called “organ pipe”. The pyramids are divided between the crested ones and the pointed ones, that is, without a gigantic porphyry stone on their top that give it an almost human appearance with head and hair.
From this particular conformation derives the name “Omeni de tera” given to it by the inhabitants of the area.

At the foot of these gigantic natural stone monuments there is a vegetation rich in mosses, leaves and roots that have had the task of slowing down the erosion of the water. The pyramids are accessed via a path that can be followed after paying a ticket, a clause established since 2011.

Another attraction, this time made by human hands, however, is the castle of Segonzano, a typical medieval building with a gloomy profile, formed by the typical crenellated walls and towers, which from its rocky spur dominates the Cembra valley. Probably built around 1200 it had a particular importance between the ‘300 and the’ 400 but was then destroyed in 1700 following the looting during the war between the Austrians and the French.

Today the remains of the fortress enjoy a suggestive atmosphere, surrounded by apple orchards and vineyards, reachable along the Corvaia path. Not only the castle but the whole area had a considerable importance during the Middle Ages as it supplied the Venetian fleet with spruce wood used to build the ships, transported to the seafaring city by river. Immersed in the woods is the Sanctuary of the Madonna of the help which houses the painting of the Madonna of the help dating back to 1682. This is a copy of a painting preserved in the church of San Giacomo in Innsbruck. It is said that the painting, commissioned by Baron Francesco Ferdinando in Prato, was found by a shepherd and taken to the parish church. However, at a certain point the painting disappeared and then reappeared at the point where the sanctuary is today, which immediately became a pilgrimage destination and an object of donations. Thanks to the latter, the local parish priests were able to afford an expansion which took place in 1861.