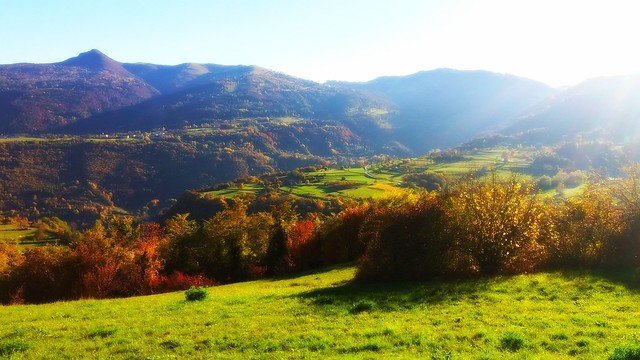 Rovereto, Vallagarina and the Brentonico plateau

Rovereto is a town of about forty thousand inhabitants located in the province of Trento. It is the main city of Vallagarina, the name that the Adige Valley takes in the stretch between Besenello and Borghetto, about 40 km long.

Rovereto is surrounded by places such as Brentonico, where it is possible to practice numerous summer and winter sports. The small town of Brentonico takes its name from the plateau of the same name that develops on the slopes of Monte Baldo. In this area there are numerous traces of the First World War.

In the city of Rovereto there is the Bell of the fallen, cast in 1924 with the bronze of the nations that participated in the First World War. Every night it chimes a hundred times, and this has made it a world symbol of peace. Not far from the bell, dinosaur footprints are found, about a hundred fossil footprints of the Cmptosaurus and Dilophosaurus dinosaurs.

Also in the city of Rovereto is the MART, the museum of modern and contemporary art, in which it is possible to admire permanent and non-permanent works by both Italian and international authors.

The Little Dolomites previously mentioned are a mountain range located between the provinces of Trento, Vicenza and Verona. They are characterized by the presence of gorges, steep walls and spiers.

Monte Baldo, which reaches a height of 2,218 m, extends both in the municipality of Rovereto and in that of Brentonico. Right here, in the Brentonico Plateau, during the winter it is possible to ski at the Polsa – San Valentino ski area, which offers, in addition to modern ski lifts, one of the largest snow parks in Trentino.

Numerous sporting opportunities, both summer and winter, are offered by the Lessini Mountains, where birdwatching has also been developing in recent years.

For trekking lovers, do not miss the Trekking of History: a path of 52 tunnels on the Pasubio massif along the paths of the First World War.

In the city of Brentonico there is a circular route that takes the name of the Sentiero delle Regole, an excursion that will give you evocative views of the mountains that form the Adige Valley.

The Val di Gresta was also affected by the First World War, but the front that affected it was defined as secondary. It is currently famous for its organic products, such as carrots, potatoes, cabbage and zucchini. For this reason it is called ‘The organic garden of Trentino‘.

From Castel Beseno, which is the largest fortified structure in all of Trentino Alto Adige, you can enjoy an excellent view over the whole of Vallagarina. In the lower part of the same valley, and just 30 minutes from Rovereto, is the Castle of Sabbionara di Avio, one of the oldest fortified monuments in the region which is currently managed by the FAI.

In Vallagarina, and especially in the municipality of Villa Lagarina, is Lake Cei, born in the mid-thirteenth century from a landslide.