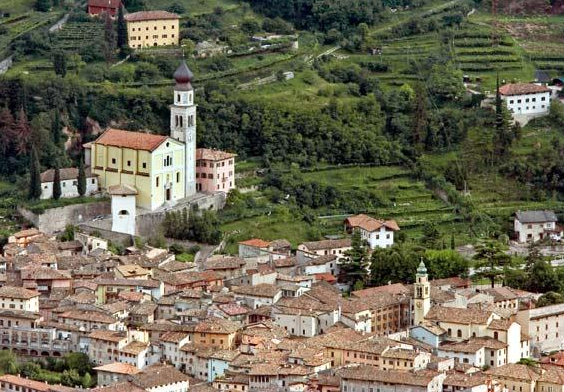 The village of Ala is one of the most important centers of Vallagarina, counting about 9000 inhabitants and a very valuable historical center.

The “city of velvet “, so called because of the important silk chains present since the Venetian domination, is crossed by a stream, also called Ala, and could include illustrious guests in its long history thanks to the strategic position it occupied on the border between Italy and the Austro-Hungarian Empire: among them, also Andreas Hofer, Wolfgang Amadeus Mozart and Napoleone Bonaparte.
Settlement of Roman origin, Ala consists of a beautiful medieval structure as regards its “Villa Alta”, where it is easy to walk through the beautiful streets and suddenly come across imposing buildings dating back to the Middle Ages and beyond.

The architecture of the city offers in fact the beautiful Palazzo de ‘Pizzini, which had the honor of hosting, among others, Tsar Nicholas I of Russia, Mozart, Napoleon and Heinrich Heine. Palazzo Angelini also hosted famous personalities traveling to Italy, such as Charles V, Maximilian II of the Holy Roman Empire and Charles VI of Habsburg. Likewise, Palazzo Zenderighi, currently the seat of the municipal library, was the place of residence of the saint Carlo Borromeo in 1565.

The illustrious origin of Ala is also testified by the whole town through the numerous frescoes and wrought iron balconies displayed on the facades of historic buildings, as well as by the large stone arches that adorn the streets of the town.

The church of S. Maria Assunta, an imposing structure full of history, dominates the city from the top of its high bell tower. The church has in fact very ancient origins, and is believed to have been a chapel annexed to a castle which was later destroyed by the infighting between the Bishops of the Principality of Trento and the Castelbarco family. Currently it is an important symbol for the entire city community.

In the vicinity of Ala, immersed in a beautiful landscape dedicated to the cultivation of vines, it is possible to reach beautiful buildings such as the Sanctuary of San Valentino, the tower of S. Margherita (dating back to the Middle Ages) or the ruins of Castel Saiori.