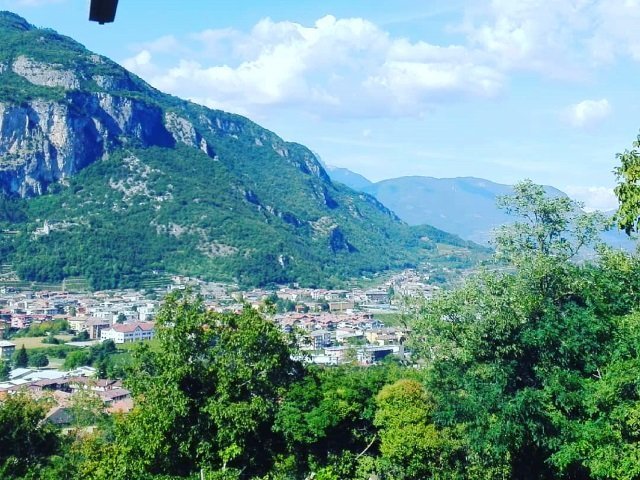 Mori, a town of nearly ten thousand inhabitants, is located at the foot of Mount Baldo and on the artery that connects Rovereto and the Adige valley with Riva del Garda and its lake.

The first historical testimonies speak of Mori in a document dated 26 February 845 where a cause was discussed between the abbot Andelbergo and some men of the area including inhabitants of Mori. From here you have the main access to the Brentonico plateau and Mount Baldo and from the hamlet of Loppio starts the road that leads to the organic vegetable garden of Trentino, the Val di Gresta.

One of the main symbols of Mori is certainly the sanctuary of Santa Maria di Montalbano, which overlooks the town with its unmistakable bell tower and the huge clock it contains. Its construction took place in 1556 probably at the behest of the Castelbarco family, and had a votive and expiatory character. It was built near the old castle of Montalbano (now reduced to ruins), destroyed, sacked and set on fire by the Venetians in 1439, due to the rebellion of Guglielmo da Lizzana against the Serenissima.

In the immediate vicinity of Mori is the lake basin of Lake Loppio, where important archaeological finds have been made on the island of Sant’Andrea, testifying the presence of man in the area already in the Bronze Age. Currently the basin has become a marshy area, due to the involuntary drying up due to the construction of the Adige Garda tunnel between 1939 and 1959.

Mori is made up of several hamlets in addition to Loppio: Besagno, Manzano, Molina, Mori Vecchio, Nomesino, Pannone, Ravazzone, Sano, Seghe I, Seghe II, Tierno, Valle San Felice, Varano. The whole territory is particularly suited to the cultivation of vines, especially in the lower northern slope of Mount Baldo, which leads up to Brentonico, where the cultivation of the sparkling wine base is characteristic.

The events not to be missed, if you have the opportunity to spend even a short stay in the area, are the Carnival, the Spring Festival and the Autumn Ganzega, which takes place on the first weekend of October.
Mori lends itself to various sports and recreational activities, such as cycling (moreover, the 18th stage of the Giro d’Italia 2013 starts from Mori, the decisive Mori-Polsa time trial) also in its Mountain Bike version, tennis, trekking, Nordik walking.