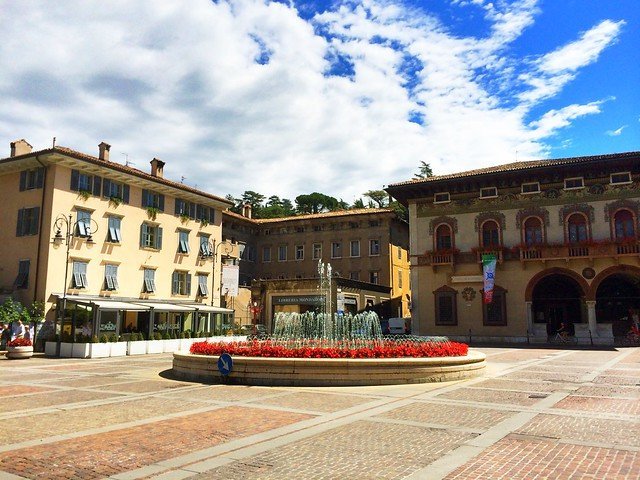 Pearl of Trentino, halfway between Trento and Verona, Rovereto is located in Vallagarina and is an important tourist, naturalistic and cultural center of Trentino Alto Adige.

With about 38 thousand inhabitants, the city looks like an ancient medieval village with a historic center, above which the city castle stands. History and culture (Rovereto it hosts two famous museums such as the Italian historical war museum and the contemporary art museum) intertwine in a location that is still closely linked to the surrounding area: Vallagarina offers a decent selection of fine wines, such as the red Marzemino, moreover the city is located just 25 kilometers from Lake Garda and is protected by the Dolomites which during the winter allow you to reach famous ski resorts, see Folgaria, Fondo Piccolo, Fondo Grande and Passo Coe.

Rovereto is considered the City of Peace and Sport. How come? Simple, as the town hosts, on the Colle di Miravalle, the Bell of the Fallen, the fourth largest bell in the world obtained in 1924 from the bronze casting of the cannons used during the First World War. The monument, which weighs 22,000 kilograms, resounds every evening with 100 strokes to remember the fallen of all wars.
In memory of the soldiers who disappeared during the First World War in the surroundings of Rovereto, precisely on Colle Castel Dante, stands the Ossuary of Castel Dante, an imposing shrine that preserves the remains of 20 thousand Italian, Austro-Hungarian and Czechoslovakian soldiers who fell in the Great War, from which you can observe the panorama of the entire city.

Surely, however, the symbol of Rovereto is the aforementioned castle, located in Piazza Podestà where there is also the town hall, which was built in the fourteenth century by the ancient noble family of Castelbarco, residing in Vallagarina. Since 1921, the fortress has also housed the Italian War History Museum.
Rovereto, however, is not just history: Palazzo Parolari is the seat of the Civic Museum, one of the oldest Italian museums, since its foundation dates back to 1851. Since 2008, a permanent exhibition of zoology, numismatics and archeology has also been set up, while every weekend astronomy shows are organized in the garden reserved for the museum. Art also occupies a prominent place within the city. The MART (Museum of Contemporary Art of Trento and Rovereto), inaugurated in 2002, is the largest contemporary art museum built in Italy in the twentieth century.
More recent, however, is the Depero Futurist Art House, which was reopened in 2009 on the occasion of the centenary of the Futurist movement, after a renovation of the building. It collects some of the most significant works of the artist, who died in Rovereto in 1960, and is the only museum in Italy reserved exclusively for an exponent of Futurism.

During the summer, the city also offers a series of reviews and events dedicated to music, art, culture, food and wine that attract a large number of tourists to the streets of the historic center. The most important of these is certainly the Green Night, an event held between the end of May and the beginning of June and which addresses the issue of environmental sustainability.