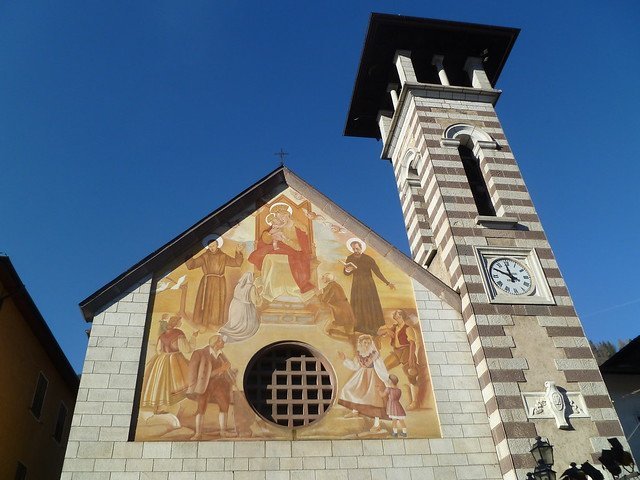 Located about 750 meters above sea level, it rises in the extensive valley at the foot of the suggestive Dolomite peaks called Pale di San Martino.

The origins and the name “Fiera di Primiero“, which has about 500 inhabitants, date back to the 15th century, when it represented the trade fair and administrative center of the whole valley.
Architectural works such as the Palazzo delle Miniere, which houses a museum inside, and the Archpriest Church recall the Gothic features typical of Tyrol.
Despite being the smallest and most recent formation, due to its history and geographical position it is considered the historical capital of the entire valley. Moreover, thanks to its central position in the landscape of the Dolomites, Fiera di Primiero has become an important tourist resort because it allows you to easily reach the most famous ski areas in the area such as: San Martino di Castrozza, Passo Rolle and Passo Cereda, which offer about 60 km of snow-covered slopes.

Despite its size, the municipality of Fiera is the place with the highest number of boutiques and clubs that follow one another in the Contrada where you can breathe the holiday air of shopping and relaxation in the clubs.
Fiera di Primiero ensures state-of-the-art tourist facilities able to offer the best welcome to tourists from all over Europe. Among all, the numerous hotels complete with every comfort stand out, from relaxation centers to organized excursions, with the possibility of practicing several sports including Nordic walking.

For lovers of freedom and for those wishing to save a little on accommodation, Fiera also offers a wide choice of apartments. Characteristics of the place are the organized après-ski activities, which entice tourists to frequent the typical local bars, where we often find ourselves having a drink and dancing in a ski outfit, perhaps after the last descent on the snow.
Even the landscape leaves anyone who admires it enchanted Pale di San Martino is certainly the main attraction, but this imposing Dolomite beauty is flanked by the famous Risonanza wood, other paths then lead to the spectacular nature reserves where it is possible to breathe pure air and admire wild animals living in the wild.

Among the other attractions of the area it is impossible not to mention the Paneveggio Natural Park which extends in the eastern part of the province, where water, rocks and forests merge giving life to a more unique than rare atmosphere that finds the attention of tourists even in the summer, where it is possible to spend relaxing days in front of clear mirrors of water or try suggestive excursions among the Dolomite inlets.