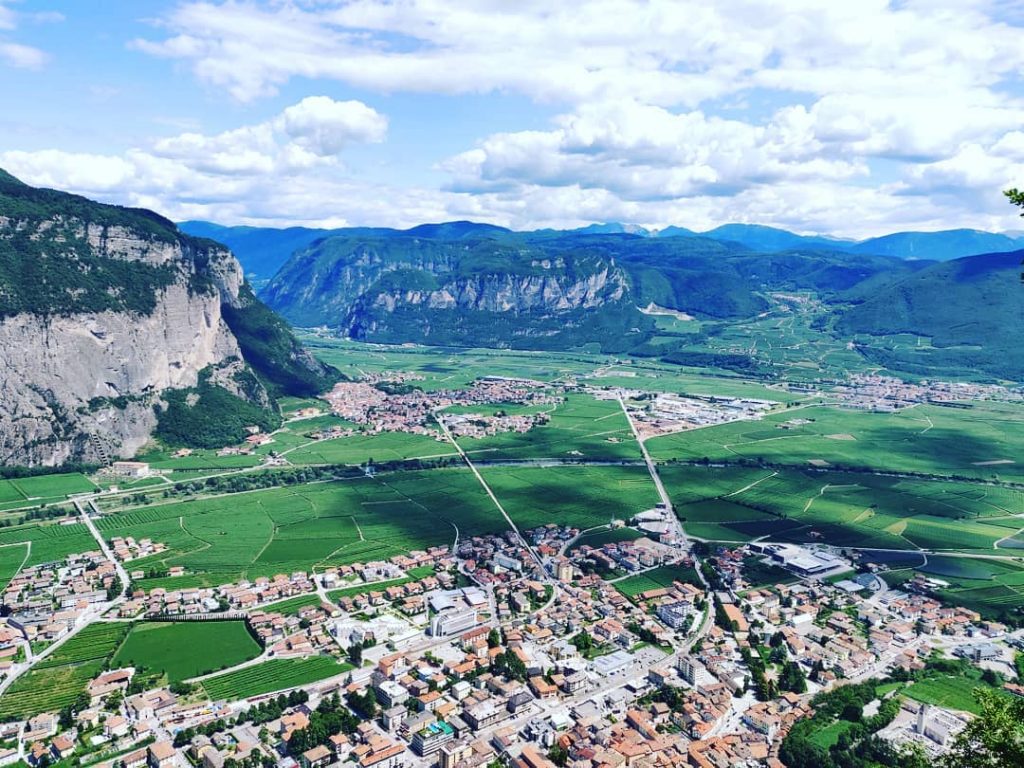 Mezzolombardo and the Rotaliana plain

Mezzolombardo, in the province of Trentino, is located in the Piana Rotaliana, a valley of alluvial origin that extends between the courses of two rivers: the Adige and the Noce.

The area has a characteristic funnel shape that is increasingly narrowing until it leads to the narrow gorge that serves as the entrance to the Val di Non.
The territory, with an average altitude of 300 meters, is surrounded by high mountains and is famous for the cultivation of a particular vine which gives rise to a highly appreciated wine: Teroldego.

Goethe had described the Piana Rotaliana as the most “beautiful vine garden in Europe” (full of vines) and even today the area presents itself with a particular charm. Mezzolombardo, with its approximately 7,000 inhabitants, is a beautiful town at the foot of the Monte Fausior and which, with its two castles, almost acts as a sentinel at the entrance to the Val di Non.
The ancient village, which is called Piaz, rises in an elevated area and has narrow alleys and alleys that make it very particular, the further downstream part of the town instead developed from the end of the 18th century and in it there are many eighteenth and nineteenth-century stately buildings and villas of great value.
The main attraction of this town is obviously the wine, the Teroldego, which for over forty years has been using the DOC designation, a product of excellence together with the excellent grappas that are distilled here. It is therefore inevitable that Mezzolombardo is one of the cornerstones of the Trentino Wine and Flavors Route: wineries and tastings are certainly not lacking in the municipal area, as well as numerous restaurants offering the typical regional dishes to which it is a must. accompany a good glass of Teroldego.
Precisely in honor of this precious product, the “Calici di stelle” event takes place every year, which could not be held except on the night which par excellence is the one most illuminated by the trails of shooting stars: 10 August, San Lorenzo. In the dreamy scenery of the castle you can enjoy dishes flavored with local wine and for everyone there is at least one glass of Teroldego to sip.
You can spend a weekend or a stay in Mezzolombardo thanks to several reception facilities and, if you choose the winter period, you have the opportunity to visit the typical Trentino Christmas markets starting from the one in Mezzolombardo which is held. in the fascinating context of the Castle. But a stay here also allows you to be a few steps from the slopes of Monte Bondone which also offers cross-country trails, ski-mountaineering, paths to follow with snowshoes and whose slopes lit up even in the evening allow you to treat yourself to the thrill of descents at night.
The evenings are spent in the local pubs and breweries, while night owls can go wild in the local disco or move a few kilometers to reach the capital.

Beautiful Trento is very close and tourists can be enchanted by its architecture which is an extraordinary mix of styles. You can see Romanesque and Gothic buildings and churches such as the beautiful Dome of San Vigilio, Santa Maria Maggiore or the Abbey of San Lorenzo flanked by Renaissance palaces and others that are strongly affected by the Habsburg influence. The medieval Buonconsiglio castle and numerous towers (33) that noble families had built next to their homes dominate them.