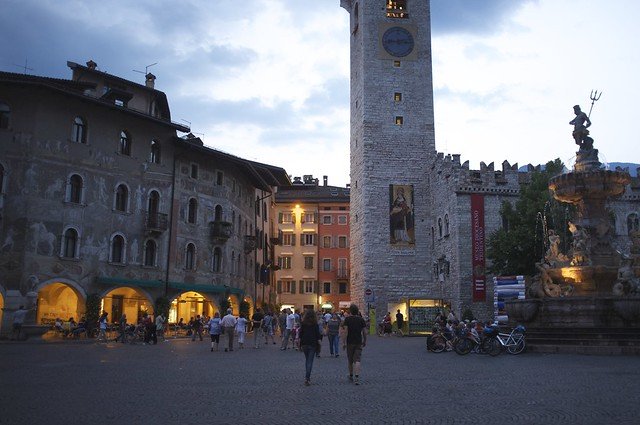 Historically, despite having always been an Italian-speaking city, Trento remained linked for centuries to the Germanic world. The bishopric of Trento, extremely rich thanks to the exploitation of the silver mines of Monte Calisio, remained formally autonomous until 1801, when it was conquered by Napoleon. The congress of Vienna of 1814-1815 assigned the city to Austria, which maintained control until November 4, 1918.
Currently the city of Trento is one of the most economically and culturally dynamic centers in the whole of northern Italy, home to a particularly active university and the destination of a notable tourist flow, both summer and winter.

The historic center of Trento keeps important traces of the city’s prosperous past, which in 1545 was chosen by Pope Paul III to host the homonymous Council, which radically reformed the Catholic Church.
The Cathedral of San Vigilio overlooks the town’s main square. The building, in Trentino Romanesque style, was built in the 13th century and contains the remains of the saint from which it takes its name.
In the same square is the complex formed by the two Cazuffi-Rella houses, sixteenth-century buildings whose facades were frescoed with representations of mythological scenes.
Piazza Duomo is then embellished by the Neptune Fountain, erected between 1767 and 1769, and by the small Eagle Fountain (animal symbol of the city).
In terms of military architecture, the most important monument is undoubtedly the Buonconsiglio Castle, built in the thirteenth century to control the road that led from the Po Valley to the Brenner and protect the city.
The complex was then enriched during the sixteenth century, with the construction of the Magno Palazzo, which became the new seat of the prince-bishops of Trento. The Magno Palazzo is richly frescoed.
The premises of the castle house some archaeological finds and a rich numismatic collection, while some of the rooms are reserved for temporary exhibitions.
The bishops of Trento gave the city another of the most interesting buildings in its heritage: the Palazzo delle Albere, built during the sixteenth century by the Madruzzo family.
The building, surrounded by a large park, initially had the function of a residence-fortress. Currently the complex houses the headquarters of the MART, the Museum of Modern and Contemporary Art of Rovereto and Trento.
The park, once much larger than the current one, was reduced to allow the passage of the railway line that connects Verona to Munich through the Brenner pass.
Trento, thanks also to the presence of the university, is a culturally active city and hosts every year a series of events including the Trento Film Festival (dedicated to the mountains) and the Festival of Economics (born in 2006 to compare economists and the general public).
San Vigilio, patron saint of the city remembered on June 26, is celebrated with a series of events that take the collective name of Feste Vigiliane. These are held every year from the middle of June until the day of San Vigilio.