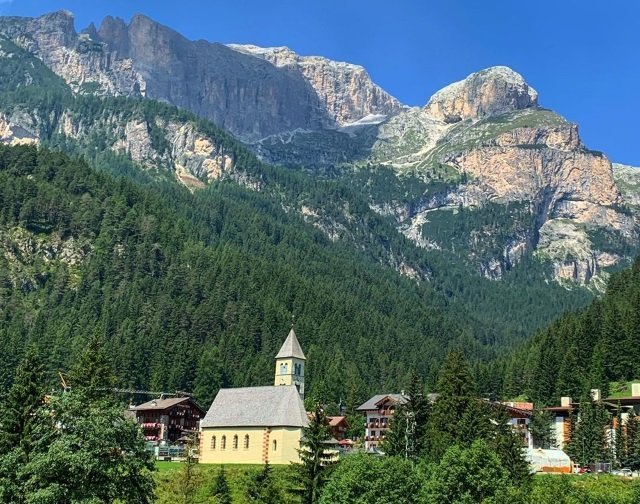 The municipality of Mazzin is a small town in the Val di Fassa, and is one of the municipalities of what is called Ladinia.

Mazzin is a small town of just under 500 inhabitants, located at 1395 meters above sea level, and is the first town in the upper Val di Fassa, where the valley begins to narrow and change direction.

The municipality of Mazzin, with the 2 hamlets of Fontanazzo and Campestrin, is known thanks to:

– some Rhaetian finds (the Reti were the population who settled in Mazzin from 500 BC) which took place on the surrounding Doss dei Pigui;
– Casa Battel, a sixth century manor, the last example of a stately home in the entire valley and embellished with frescoes and decorations and the presence of a beautiful spire tower;
– being surrounded by the splendid Dolomites;
– the Ladin museum.

EXCURSIONS:
In the surroundings of Mazzin it is possible to undertake various excursions with destinations of considerable natural interest: among these, the nearby Antermoia Valley, which connects the area to the Catinaccio Group and is carved into the Dolomite rock.
In the valley there is also a magnificent lake located on the Catinaccio, the lake of Antermoia, which has long been present in the stories of the Ladins.

SCI:
During the winter the town is a destination above all for cross-country skiing lovers, as from Mazzin it is possible to take the Marcialonga track, which leads to the well-known center of Canazei and then back to the valley floor.
Those who love alpine skiing can also find a well-equipped ski bus network, through which they can quickly reach the nearby ski resorts such as the famous Col Rodella ski area and the popular slopes of the Sella Ronda.