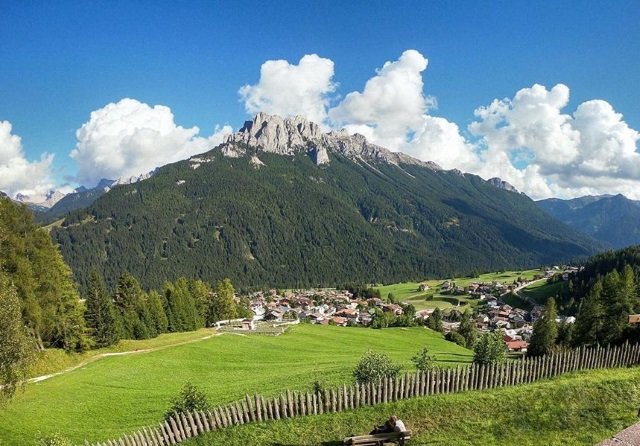 In Vigo di Fassa you will be able to meet nature as you have never seen it before. Both summer and winter you can try the different activities offered by the Val di Fassa.
The first historical traces of Vigo di Fassa date back to the Paleolithic when groups of hunters went up the course of the Avisio stream to look for areas rich in fauna, but it is in the Middle Ages that the first historical evidence is found. From that period you can still admire an old monumental barn, next to the rectory of the village parish.

The town lived on agriculture and cattle breeding until 1860, the year in which the state road of the Dolomites was inaugurated, and with it the first flow of tourists began to arrive, especially from Austria. The tourism industry slowly developed with the construction of hotels and residences. Like much of Europe, Vigo di Fassa found itself involved in the First World War, and being on the front line, it saw some of the bloodiest events. After the war it was annexed to Italy and tourism began to grow exponentially. In fact, the first ski lifts were built and the accommodation facilities grew considerably.

Among the things to see we certainly point out the church of San Giovanni, built in the Gothic style and considered one of the oldest buildings in the valley, which preserves frescoes from the sixteenth century. Another example of sacred architecture is the church of Santa Giuliana, isolated on a hill, whose existence is documented as early as 1237. Inside there is a carved wooden altar dated 1517, considered one of the most prestigious works of the artist Giorgio Artz of Bolzano. The frescoes in the apse, from the second half of the fifteenth century, are attributed to Brissinese artists, real specialists of their time.

A little further downstream you can visit the Austro-Hungarian cemetery which collects the bodies of about 600 Austrian soldiers who died on the front in the first war.
In the hamlet of San Giovanni there is the Ladin museum of Fassa, which illustrates the people and culture of Fassa, through photographic evidence, clothes and tools of the past.
Vigo di Fassa is the starting point of the Catinaccio cable cars, within the Dolomiti Superski area, snow cover is almost guaranteed since all the slopes are equipped with any artificial snow.