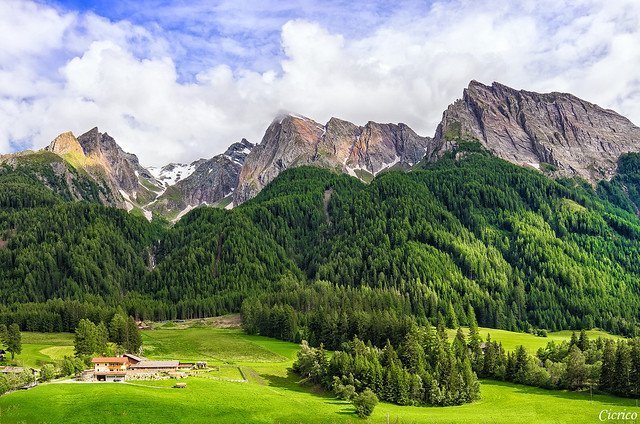 Located in north-western Trentino, the Val di Non consists of a vast plateau crossed by the Noce stream, which flows between deep gorges and imposing mountains.

It is an area rich in history, the traces of which can be admired in the numerous castles, in the ancient noble palaces, in the museums and in the churches.
But the Val di Non is above all the ideal holiday for outdoor sports enthusiasts and for those who simply want to spend time in contact with nature and the most genuine agricultural traditions.

Surrounded by thick woods, orchards and the beautiful Castle of Cles, the Val di Non offers an enchanting natural spectacle thanks to the variety of its vegetation and the suggestive lakes that characterize it:

Lake of Santa Giustina, which rises in the center and extends for a length of about 8 kilometers.

Lake Tovel, at 1178 meters above sea level, which is the largest natural lake in Trentino and the pearl of the Adamello – Brenta Natural Park, with its characteristic reddish water due to the presence of a particular alga.

Emerald Lake, whose name is evocative of the color and reflections of its water.

IN WINTER
An important attraction is the Mendola Pass, at 1363 meters, on the road that leads to Bolzano, a well-known tourist center renowned above all for winter sports.
For winter sports enthusiasts, in Val di Non there are numerous ski areas, such as that of Ruffrè, a famous tourist resort of the Austro-Hungarian period, as evidenced by its numerous hotels and imperial villas, and the cross-country ski slopes of the Plateau. della Predaia, located on the eastern side of the Valley.

IN SUMMER
In addition to skiing, it offers a wide choice of activities to be practiced in contact with nature, such as excursions along the numerous hiking trails and the Dolomiti di Brenta Bike, a 171-kilometer circuit around the rocky massif of the Brenta Dolomites, which crosses the Adamello Natural Park in a magnificent natural setting.
Do not miss the sport fishing in the Coredo and Tavon lakes, rafting and canoeing along the Noce stream, whose waters creep into the spectacular canyons of the Val di Non.
Another very popular sport in Val di Non is golf, practiced in the well-known course of the Dolomiti Golf Club, in the Municipality of Sarnonico, considered one of the most beautiful and most demanding courses in the Alps, surrounded by the natural wonders of the Dolomites and Maddalene.

TO BE SEEN
In addition to the Castle of Cles, absolutely worth seeing is the suggestive Sanctuary of San Romedio, perched on a cliff in the Municipality of Coredo. The sanctuary, made up of 5 small churches joined together by 130 steps that form a spectacular flight of steps on the steep rock wall, is visited by 200,000 pilgrims every year.

Do not miss a visit to the nearby South Tyrolean wine museum, located at the foot of Monte della Mondola, and a tour of the many wineries where you can taste the excellent wines of the area.