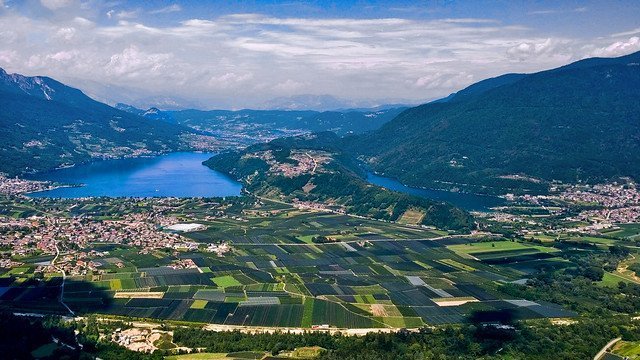 Caldonazzo, which gives its name to the main lake of Valsugana, is a town of just over 3,000 inhabitants in the province of Trento, about 560 meters high.

A small town in the province of Trento, Caldonazzo is known above all for the presence of the lake of the same name, from which the Brenta river originates and on which it is possible to practice summer water sports. A countryside divided into two parts, two different tourist attractions: on the one hand the lake with its beaches and its waters that attract young people and sportsmen from the neighboring regions and on the other the village characterized by the typical style of the villages of Trentino Alto Adige.

It seems that Caldonazzo took its name from the lake, the largest in the area, today the source of intense tourism.
The beaches are well-kept and equipped with various lidos.

It is also the only lake in Trentino where it is possible to practice water skiing and therefore a favorite destination for sports enthusiasts and onlookers.
There are numerous nautical clubs in the area that organize competitions not only nationally but also internationally.

The beach, on the other hand, is divided between free areas and areas occupied by real bathing establishments with bars, restaurants, game rooms, children’s areas and pedal boat and rowboat rental.
Water skiing is not the only sport in the Valsugana valley, in which the town of Caldonazzo is immersed. In fact, the lake, thanks to its mild temperatures and its clear and clean waters, also allows you to practice swimming and diving together with canoeing and windsurfing. Another local activity is fishing which you can freely dedicate yourself to after obtaining a regular permit.
There are also many equipped paths around the lake for lovers of walking and cycling.

The village is instead dominated by the magnificent Court of Caldonazzo, famous as Castello Trapp, the seat of justice since the thirteenth century, which belonged first to the Caldonazzo family and then to the Trapp counts from whom it was purchased in 1461.
The Trapps were mainly involved in the decoration of the building as evidenced by the allegorical cycles that decorate some rooms.
Now private property, the magnificent courtyard hosts the typical Tyrolean Christmas market every year.
Opposite the Corte Trapp is the 14th century church built in honor of San Sisto, patron saint of the place, who is the keeper of precious frescoes dating back to various eras.
The most beautiful frescoes are found on the ceiling: in the center the Madonna with child, on the right Valentine’s Day and on the left the representation of San Rocco.
In front of the church, to the left of the path, a wall, a direct witness of the ancient construction of the castle of the lords of Brenta which stood right on that point and which was probably destroyed in 1300.

An area rich in historiography in which tombs dating back to Roman times and a Christian epigraph have also been found.