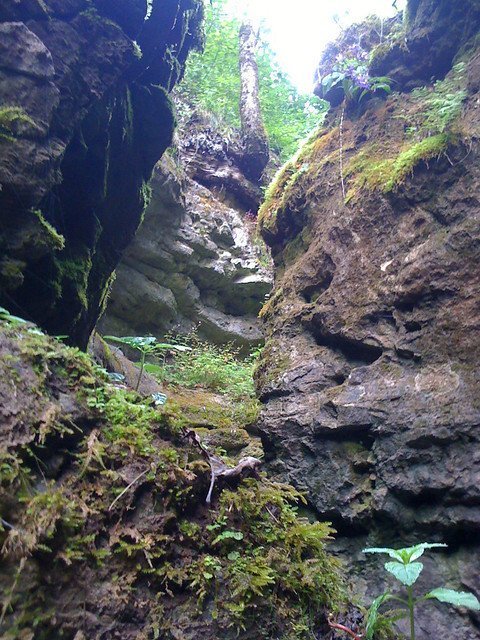 In Val di Non it is possible to try the experience of a guided journey to the depths of the earth, in which the incessant rhythm of the water has dug, in a very long time, deep channels among the Dolomite rocks: this is the famous valley of the Trentino canyons.

In the distant Quaternary, in fact, the entire Valle di Non was covered by glaciers, whose partial melting during the summer was so impressive that it was able to permeate the underlying rock.
The watercourses thus generated, which over time became streams, slowly dug the current gorges until, about 15 thousand years ago, the glaciers retreated completely and gave way to a spectacular river network embedded in limestone rocks .

In this incredible natural context there are numerous attractions for visitors, here are the main canyons of the Val di Non:

CANYON RIO SASS:
Among the most popular places there is undoubtedly the Rio Sass Canyon, located in the village of Fondo and which cuts the town in two.
The canyon is made accessible thanks to the arrangement of numerous walkways and ladders, which will allow you to directly observe from the inside the narrow rocky passages, the deep gorges and the high waterfalls of the gorge.
The canyon foresees a drop of 145 meters and 348 steps, developed in an exciting series of tight curves that follow the movement of the ancient stream; appreciated by the youngest and the oldest, the Rio Sass Canyon undoubtedly represents a path full of adventure.
The gorge is accessible only in the period between March and November, also through guided tours.

PARCO FLUVIALE DELLA NOVELLA:
Another particularly interesting destination is the Novella River Park, which winds through the gorge dug by the homonymous stream in the municipalities of Cloz, Romallo and Dambel.
The path, 3.5 km long and equipped with walkways to facilitate the visit, is the ideal place to get to know the geological past of the Trentino area and at the same time experience the freshness of its woods. Also closed in winter, it is provided with a guided tour service upon reservation.

OTHER ROUTES / CANYON:
Alongside the routes already mentioned, the Val di Non provides numerous further suggestive routes among its canyons, with various levels of difficulty and length.
Among these we can mention the path that joins the Bottom Canyon to the Smeraldo Lake or the Tret Waterfall, the “Passeggiata Margherita” (Sas del Coèn), the Busi – Canyon di Gorzana path or the one that leads to the Hermitage of S. Giustina , located near the lake basin of the same name.

The Canyons of the Val di Non are unique places, to be explored and fully experienced: the perfect destination for those who love adventurous paths in an exceptional naturalistic context.