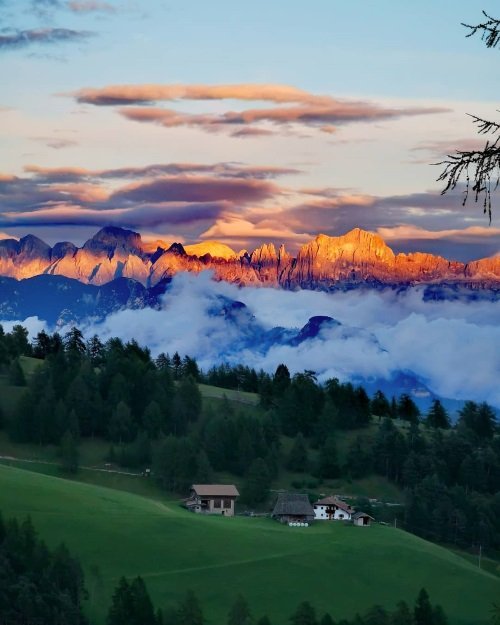 The Dolomites that are colored …

TheEnrosadira (lit. from Ladin to become pink) is a phenomenon very dear to all lovers of the Trentino mountains, and in particular of its Dolomites: in fact, this term indicates the reddish color assumed by the peaks of the Dolomites and which, in some hours of sunrise and sunset, it can gradually approach purple.

The phenomenon is mainly caused by the very chemical constitution of the Dolomites.
These mountains are in fact formed mainly by dolomia, a sedimentary carbonate rock consisting predominantly of dolomite, which in turn is a compound of magnesium and calcium carbonate.
This chemical structure ensures that, when the air is clear, the sunlight can refract causing the characteristic pink color that distinguishes these alpine peaks.

The shades of color assumed by the mountains are not stable, on the contrary.
They can change not only at different times of the year, but also simply from day to day. This is mainly due to the position in which the sun’s rays reach the mountains, as well as to the specific conditions of the atmosphere and air.

The enrosadira phenomenon can be appreciated on all the Dolomites, and in particular on the walls facing east during sunrise and on those facing west during sunset.

Enrosadira is such a particular and fascinating phenomenon that it could not fail to arouse the curiosity and imagination of the popular imagination.

There are still numerous versions of the legend of King Laurin (in Ladin King Laurin), a dwarf king in possession of a beautiful rose garden located on the Catinaccio.
One of the most popular stories tells of how the prince of Latemar ended up intrigued by the magnificence of Laurino’s Rosengarten and ventured there, meeting the king’s daughter; the prince was so struck by her young woman’s appearance that he kidnapped her, wanting to make her her bride. King Laurino, desperate, then launched a curse on his garden because of such a terrible misfortune: never again would anyone be able to admire its beauty. The spell, however, did not touch the hours of sunset, a period in which the eyes of men can still enjoy the enchanting pink of the Dolomites.