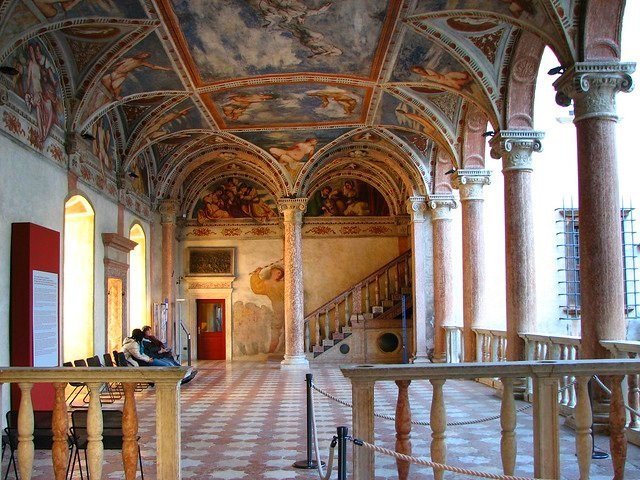 One of the symbols of Trento is the famous Castello del Buonconsiglio, current and suggestive seat of a museum.

An important and vast Trentino monumental complex, the Castle was built as a Roman castrum and was, from the thirteenth century to the eighteenth century, the magnificent residence of the prince bishops of the city.

Splendid fortified complex, the Castle looks like an orderly set of architectures built over different eras and embraced by a wall.
The oldest nucleus is represented by the military stronghold known by the name of Castelvecchio: it dates back to 1200, even if it was remodeled a couple of centuries later, it is typically Romanesque in taste and is characterized by the presence of a monumental cylindrical tower, better known like Torre d’Augusto.
At the end of the fourteenth century, Castelvecchio was united, at the wish of the Prince Bishop George of Liechtenstein, to the Torre Aquila. The Tower, characterized by a Gothic roof, is famous for hosting a remarkable cycle of frescoes known as the Cycle of the Months, and created, with great care, by Maestro Venceslao and considered one of the finest examples of international Gothic art. of northern Italy. Unfortunately, the Cycle of Months has come to us incomplete as the month of March was irretrievably lost in a fire.

At the beginning of the sixteenth century, following an ambitious urban redevelopment project strongly desired by Cardinal Bernardo Clesio (a man of culture, a lover of beauty), the Buonconsiglio complex was completed by Renaissance-style architecture: the Magno Palazzo, frescoed by the Italian painters Dosso Dossi – one of the main artists hosted by the Este court – and by Girolamo Romanino.
At the end of the seventeenth century, in the Baroque period, the Giunta Albertiana was built (the name is a clear homage to Giuseppe Alberti, architect and painter) which connects the Renaissance Magno Palazzo to the medieval Castelvecchio.

When Napoleon’s troops invaded Trento, Pietro Vigilio Thun, the last prince-bishop, had to withdraw to Val di Non, and slowly the castle was abandoned and resized: the Austrians transformed it into a simple representative office.

The Buonconsiglio Castle houses the Provincial Museum, characterized by the presence of archaeological collections, ancient art, medieval art, modern art and contemporary art.
The archaeological collection includes six hundred finds, some of which tell the story of Trentino from the Upper Palaeolithic to the Early Middle Ages.
Of considerable artistic and historical value are the collection of Renaissance bronzes and medals and the collection of codices including “the Purple Evangeliary”, from the 5th century.

Before concluding, we remind you that Castello del Buonconsiglio is part of an important exhibition network, together with three other Trentino castles: Castel Thun in Val di Non, Castel Beseno, near Rovereto and Castello di Stenico, in the Giudicarie valleys.

HOW TO GET TO BUONCONSIGLIO CASTLE

The Castle is located in the city of Trento, at number 5 of Via Bernardo Clesio, and is easily reachable both by own means and by train.

WHEN TO VISIT THE BUONCONSIGLIO CASTLE

The Castle is open every day of the year, with the exception of Christmas, New Year and all non-holiday Mondays (except for those of the month of August).

During the summer – from mid-May to early November – the Castle is open all day. from 10 to 18.
During the winter months, the Castle opens at 9.30 and closes at 17.

Admission to the Castle is not free. The full ticket costs € 8, but there are reductions for young people, for the over 65 and for all those who are members of affiliated organizations.