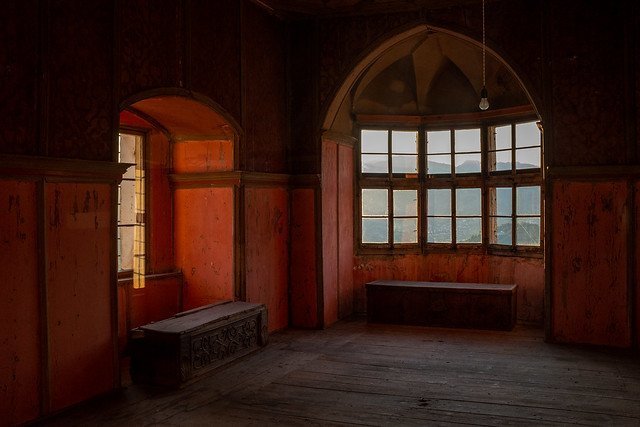 Castel Pergine rises to the east of Pergine Valsugana, on the Tegazzo hill, straddling the basins of the Fersina and Brenta torrents.

The history of the building is truly ancient and full of events: the place once served as the site of a Roman (or even pre-Roman) construction, testifying to its incredible function from a strategic point of view.
The Lombards also took possession of the building and modified it, making Castel Pergine an important fortress; to follow, the famous family from Pergine obtained the dominion, making it their residence and there, as is well known, guilty of nefarious crimes.

However, the Castle underwent various and numerous vicissitudes: from the powerful Counts of Tyrol, it passed from the hands of the lords of Padua until it was Cardinal Bernardo Clesio who redeemed its dominion and kept it, except for brief and not very significant vicissitudes, under the dominion of the powerful bishopric of Trento. . It is in fact the influence of the Prince Bishops of Trentino to give Castel Pergine its definitive connotation, making it a very important example of Gothic military architecture even though it was built in the middle of the Renaissance.

Its troubled history did not end with the end of the Trentino principality, on the contrary: the famous Indian theosophist, writer and poet Jiddu Krishnamurti, proclaimed “Master of the World” by the Theosophical Association, used the castle as a seat to spread his teachings. In this way Pergine became a fundamental center worldwide for those who were interested in a spiritual search and following the teachings of one of the main mystics of the twentieth century. However, this was not very appreciated by the local population, who made no secret of it and protested on several occasions.

After the Second World War, Castel Pergine was bought by the Oss family who turned it into a restaurant and a hotel, putting an end to the turbulence that characterized its history.

Like any self-respecting castle, there is no shortage of legends that surround it: it is said that, at night, it is possible to see a white lady who wanders without peace within the walls of the castle, a place where she met a violent death and which prevents her from find rest.

The ground floor and the first floor of the structure, although now hosting a private activity, are made accessible to the public. The second floor has also recently been open to the public, with guided tours running from April to November.