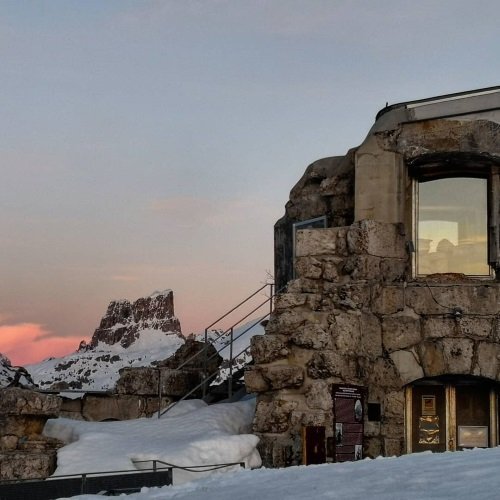 Trentino was one of the toughest battlefields on the entire Italian soil.
Even today there are numerous military constructions, trenches and tunnels scattered throughout the territory of the Province.

There are over 80 forts located along the line which, during the Great War, constituted the battle front between the Kingdom of Italy and the Austro-Hungarian Empire.
The war constructions currently constitute, as well as a historical document of exceptional importance, also gods incredibly fascinating routes both for lovers of military tradition and for nature lovers: among deep woods and sudden slopes, the buildings allow not only to savor a fundamental and tragic moment of the Italian tradition, but also to reconcile this with the exploration of beauties natural areas of Trentino.

Every aspect of the Great War is managed by the Italian War History Museum of Rovereto, which constitutes one of the most complete exhibitions on the subject ever and which, with the ample material available and a great variety of specific exhibitions on the subject, allows you to get closer to what the Great War really meant for the Trentino and Italian.
The Museum also manages the Trentino Grande Guerra network, to which 19 other Trentino museums dedicated to the subject collaborate.

Among the main forts of Trentino we can mention, first of all, Forte Belvedere, an important location both for its beauty and for its historical value. Located at 1,177 meters in the upper Astico Valley, the fort was saved from destruction by the fascist regime by King Vittorio Emanuele III himself by virtue of what had been one of the key places of the war. Other particularly suggestive places are the Forte Valmorbia – Pozzacchio, the Forte Nago (near Torbole), Forte Larino and Forte Corno (buildings that dominate the Valle del Chiese, one of the main battlefields of the First World War) and the so-called ” Trincerone “. The latter constituted the last defensive bulwark of the Italian army against the Austro-Hungarian attack launched on May 15, 1916; from the Trincerone, the Italian army could spot the city of Trento (one of the fundamental objectives of the tricolor troops), while the Austrian one was not far from the Po valley, gateway to the whole of northern Italy.
The historical importance of the Trincerone is underlined by the numerous possible visit routes which, passing along Monte Zugna, immerse themselves in the history of the Great War.

There are also numerous itineraries dedicated to visiting the Trentino forts and which allow you to combine historical and naturalistic interest.
From Monte Calisio to Forcella Sasso Rotto, from Cime Capi and Rocca to eastern Monte Tonale, passing through the Tour of the Forts of the plateaus of Folgaria, Lavarone and Luserna.
The Italian War History Museum of Rovereto also organizes, in the period between May and September, excursions throughout the province with a historical guide along the main sites of the Great War in the whole of Trentino.