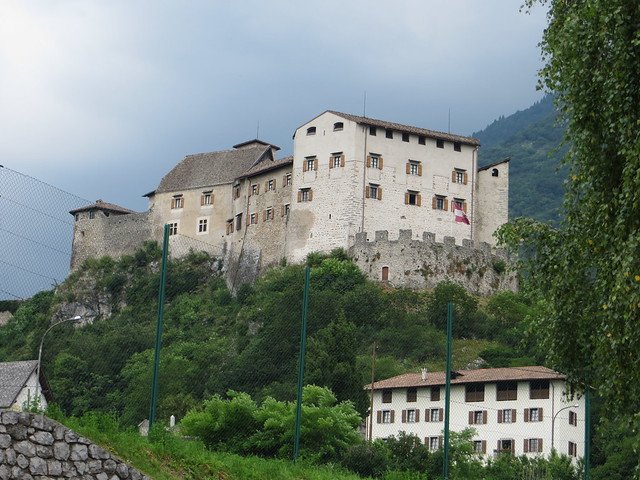 For the tourist who wants to visit Trentino there is the wonderful Stenico Castle that crowns the peaks of a hill at the foot of the Dolomites, above the town of the same name and is located in the area of Terme di Comano, between the city of Trento and the zona del Lago di Garda.

It is one of the oldest examples of the evolution of the construction of the castle, built in the distant 10th centuryand which continued development until the area came under Austrian rule.

Its history is closely connected with the episcopate of Trento.
The bishops transformed it into an elegant castle by having frescoes painted and made it their safe residence.
In the large rooms there are particularly noteworthy frescoes, and some of these are probably the work of Marcello Fogolino who was present at the court of Bernardo Clesio in Trento, who was the old owner.

The decline of the castle began during the occupation by the Napoleonic troops. In 1829 it became the property of the Austrian state, and was used to house the royal courts of the valley. To the south, close to the walls, a new connection was rebuilt between the two existing buildings.

The castle was subsequently awarded to the Italian state and the restoration work began in 1910.
From 1973 the work was continued by the Autonomous Province of Trento which was entrusted with the protection.

The castle complex can be reached from the town square of Stenico, along a steep ramp up to the north wall, passing through a hotel that was once the stable.

It is a very popular place for contemporary art lovers who use it as a reference point for photographic competitions and has an important archaeological section that covers the history of the whole area.

Today it has become the definitive property of the Autonomous Province of Trento and is open every day except Monday. During the tourist season there are many free guided tours which take place on Wednesdays by reservation.

Today the castle of Stenico has also been used as a museum and in its large rooms there is a lot to see and admire.
Its numerous rooms are in fact furnished with furniture, paintings, firearms, as well as ancient tools for everyday use, all borrowed from the collections held by the Castello del Buonconsiglio in Trento, of which the Castle of Stenico is one of the branches. The Hall of Judgment certainly the most interesting houses a section with ancient locks, keys and coffers, while the Meeting Room is often used for concerts thanks to its excellent acoustic capacity.

The rooms in the south wing instead boast an archaeological section, which exhibits finds from the site of Fiavè.

Finally, a curiosity: according to the tradition of these particular types of residences, it also has its fair share of mysteries and legends; in fact one of the towers was used to lock the prisoners in a sort of isolation and they were left without food until they died of starvation so, according to the legend, the screams of the unfortunates were heard throughout the country and still today some believers claim to see and hear them sing strange melodies during the full moon.

For tourists who want to visit Trentino, not to be missed is the Castle of Stenico and its village, reachable from the A22 Brenner motorway at the Trento centro exit, then continuing for about 40 kilometers.