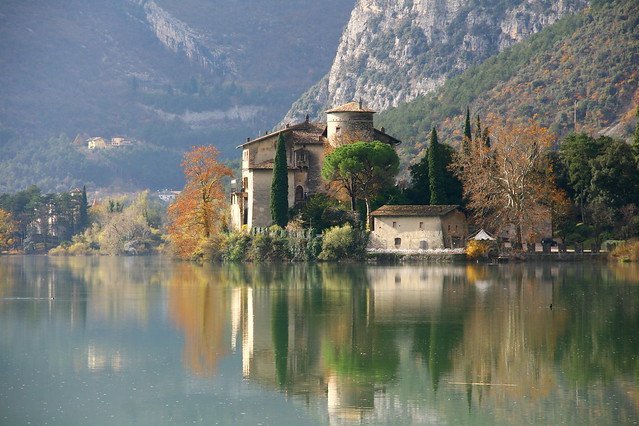 In south-western Trentino, in the so-called Valle dei Laghi, between the municipalities of Calavino and Padergnone, we can visit a rare and wonderful example of a lake castle.
We are talking about Castel Toblino, one of the most famous and fascinating Trentino castles.
Imposing residence of the past characterized by splendid and harmonious forms of Renaissance taste, Castel Toblino stands, in a sheltered position, on a small rocky spur lapped by the small alpine lake of Toblino.
That ridge of rock, centuries and centuries ago was an islet (as the level of the lake was about a couple of meters higher) and the Castle was built right there for defensive purposes: not far passed the important road that joined the city of Trento at Valli del Sarca e del Chiese.

Surrounded by unspoiled nature of rare beauty, Castel Toblino is surrounded by dark and mysterious legends.
About 2,000 years ago it was thought that it was inhabited by fairies and a small temple was built to them during the third century, of which we know thanks to a small plaque walled up in the portico of the manor. This is an exclusive testimony that the archaeologist Paolo Orsi did not hesitate to define “unique of its kind in the Roman epigraphic reality”.
Over time, the temple, wrapped in its magical and religious aura, was transformed into a stronghold of considerable military and strategic importance (just think that several Trentino lords fought to take possession of it).

In 1100, Castel Toblino became the residence of the vassals of the prince-bishop of Trento; later, in the 13th century, the ownership of the manor passed to the Da Campo family until, at the end of the 15th century, it became an episcopal property.
Following these changes, in the sixteenth century, the castle flourished again, thanks not only to wise management, but also, and above all, to significant restructuring and enhancement interventions desired by Bernardo Clesio, cardinal and important political personality
What until a few decades earlier was a grim fortress, was transformed into an elegant residence, much loved by the Prince Bishops of Trento.
Among these, particularly linked to Castel Tomblino, was Carlo Emanuele Madruzzo. Last, Prince Bishop of his dynasty – who ruled the Diocese for 120 years – was much discussed (due to his conduct that was not always exemplary and irreproachable).

And one of the most grim and terrible legends that surrounds Castel Toblino is linked to the Prince Bishop Carlo Emanuele Madruzzo.
It seems that the Bishop had established a sinful relationship with Claudia, the beautiful and young daughter of Lodovico Particella. From their chat about love story, children were also born and Mandruzzo, tired of the constant gossip, came to ask for the papal dispensation in order to legitimize his situation and marry his lover. Unfortunately, the prince-bishop could not realize his intentions because, one evening, his beloved Claudia, was the victim, together with his brother Vincenzo, of a mysterious accident, which took place on the lake.
The two, as usual, were reaching the castle aboard a small boat, but suddenly, the boat capsized and the lake engulfed them.
Legend has it that even today, on full moon nights. Claudia and her brother, wander desperately from one bank to the other of Lake Tomblino.

It is good to remember that for several years Castel Toblino has been the elegant location of a refined restaurant. The Castle is private property and, unless agreed with the owners, it can only be visited externally.

HOW TO GET TO CASTEL TOBLINO
Castel Toblino is located in the hamlet of Sarche – in Via Caffaro, 1.
You can easily reach it from every corner of Italy: just follow the Strada Statale n. 45 of the Western Gardesana, for about 20 km.