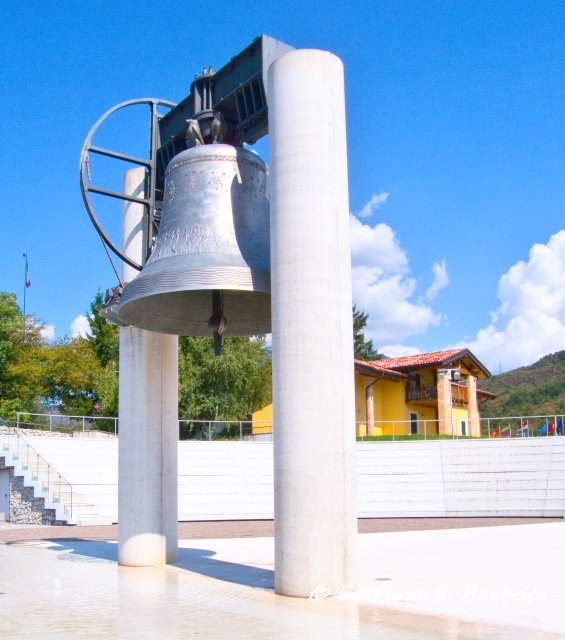 The Bell of the Fallen, also known as the Peace Bell was an idea that came to the patriot Don Antonio Rossaro, who wanted a bell to remember the atrocities of war to future generations in his Rovereto.

The bell came merged in 1924 in Trento with the bronze obtained from cannons belonging to nineteen nations that had engaged in the world war and was initially placed in the castle of Rovereto, where it was baptized with the name of Maria Dolens on May 24, 1925 (tenth anniversary of Italy’s entry into the Great War) and played for the first time on October 4 of that year, in the presence of the sovereign Vittorio Emanuele III.

The decoration of the bell – weighing a total of over 22 tons – was entrusted to the local sculptor Stefano Zuech, who sculpted a bas-relief in a neoclassical style.

Trentino, during the First World War (1915-1918), was the scene of bitter clashes between the Italian army and that of the Austro-Hungarian Empire.
On the eve of the conflict, the area belonged to Vienna: after three years of bloody battles, the Italian troops managed to wrest the region from the Austrians.
During the three years of the conflict, other armies intervened to help their respective allies: from the imperial side, Austrian, Hungarian, Polish, Czech, Slovak, Slovenian, Croatian, Bosnian and German troops fought; from that of the Kingdom of Italy took the field, in addition to the Italians, French, English and Serbs.

To commemorate the hundreds of thousands of fallen of the conflict and to give a perennial warning to future generations, since 1965 Rovereto has hosted the gigantic Bell of the Fallen on the Colle di Miravalle, which every evening rings a hundred tolls to commemorate the victims of each conflict.

The bell rings at 20:30 (solar time) or 21:30 (summer time); it also rings every Sunday at noon.
Currently the bell is protected by the “Opera Campana dei Caduti” Foundation, founded in 1968 and approved with a decree by the then President of the Republic Giuseppe Saragat.

Due to a production defect, in 1939 the bell was dismantled and recast in Verona, returning to the castle of Rovereto in May 1940. A new imperfection made it useless, but the events of the Second World War, which broke out recently, prevented any intervention to fix the problem.

Finally, in 1964 the bell could be cast again in Reggio Emilia. The new Maria Dolens was blessed by Pope Paul VI in Rome on November 4, 1964, and placed in the seat it currently occupies, Colle di Miravalle.
The weight of Maria Dolens is 226 quintals (the clapper alone weighs six), the height is 336 centimeters and the diameter at the base is 321.

The bell is currently placed in the center of a large space surrounded by stands, which allow visitors to attend the Sunday or evening commemorations in the months between April and September.
In the surrounding area, around the Piazza delle Genti and along the Viale delle Bandiere, the banners of eighty-four nations of the planet, delivered to the “Opera Campana dei Caduti” Foundation personally by the ambassadors, to symbolize the commitment that these states undertake to avoid the terrible disasters that war inevitably brings with it.

The bell area is open to the public throughout the year, with times that vary according to the seasons: the opening is always at 9 in the morning, while the closing changes. During the winter, from the beginning of November to the end of February, the complex closes at 4.30pm; in the months of March and October at 6 pm; during the summer, from April to September, it closes at 7pm.

Furthermore, from April to September, the complex reopens in the evening to allow visitors to attend the ceremony of the hundred bells: from April 1st to June 14th and from September 15th to the end of the month the opening hours are 20.30-21.30, while from 15 June to September 15 is from 9pm to 10pm.

The museum area hosts a permanent photographic exhibition that traces the salient steps in the history of Maria Dolens. The ticket price is 3 euros, children up to 15 years pay a reduced admission of 1 euro.