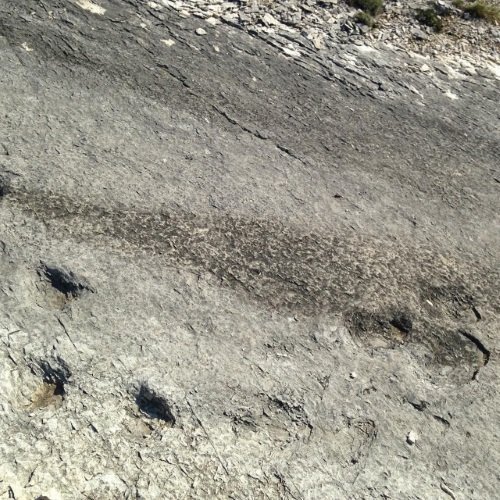 There are numerous prehistoric finds made in Trentino,

Of particular importance are the Footsteps of the Dinosaurs at Marco’s Lavini, located near Rovereto and more precisely on the slopes of Monte Zugna.

Where are
A short distance from the motorway toll booth it will in fact be possible to undertake a path aimed at admiring hundreds of dinosaur footprints, both carnivorous and herbivorous, dating back to as much as 200 million years ago; in the Jurassic age, in fact, the area of Monte Zugna formed part of the shore of the Sea of Tethys, and the footprints excavated in the muddy ground have allowed its conservation until today.

1 – the first is located a short distance from the forest road
2 – the second is located a few hundred meters higher.

The inestimable historical importance of the findings is accompanied by the spectacular nature of the fragment of life they photograph; you can in fact admire the signs of the passage of the Ornithischians, herbivorous dinosaurs, between 5 and 6 meters long and that could weigh two tons, as well as of the Theropods, carnivorous animals that threw themselves in pursuit of the first in an attempt to make them prey .

Guided tours
To allow you to appreciate the paleontological importance of the Dinosaur Footprints, the Civic Museum of Rovereto organizes guided tours on the second Saturday of each month in the period between April and October, using the accompaniment of experts who, through “thematic stages”, reconstruct the geological and biological history of the Trentino region.