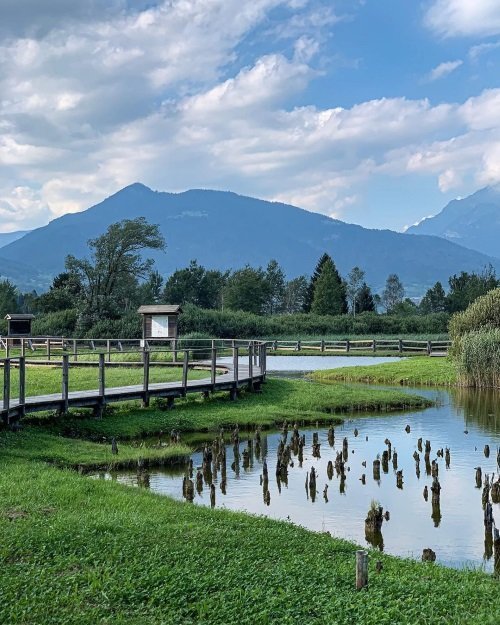 In the area adjacent to the Municipality of Fiavè is home to an important protected natural area, established in 1988 and with a surface of 140 square km: the biotope Fiavè, declared since 2011 UNESCO World Heritage Site together with the other 110 locations making up the site that the institution has dedicated to the prehistoric pile dwellings present in the Alpine area.

The place was already known since the nineteenth century for its importance archaeological, but it was only from the second half of the last century that targeted excavations brought to light the incredible remains of human settlements from prehistoric times, located in the basin of a lake that existed several thousand years ago. The turbification of the place has allowed the conservation of exceptional quality of a variety of archaeological finds; seven different inhabited centers belonging to different periods of stationing have been found.

The oldest is temporally placed in the late Neolithic-Eneolithic period, approximately around the third millennium BC; it was located on a small island in the ancient lake Carera, and consisted of several platforms based on logs placed on the bottom of the lake.

However, it is the second settlement to have fundamental importance, being able to distinguish in it at least two distinct nuclei dating back to the Middle Bronze Age (about 1400 BC): while the first was found on the mainland, the other is instead a pile-dwelling.

The remains of a pile dwelling belonging to the same period were also found, the base of which included poles of about ten meters built mainly in fir wood and planting in the lake for a depth of about 4-5 meters.

The three subsequent settlements date back to the ancient and middle Bronze Age, and of them a forest of poles remains, constituting a support for the stilts, driven into what was the lake basin.

The sixth settlement also belongs to the Middle Bronze Age (circa 14th century BC) and constitutes the remains of an entire village abandoned due to a devastating fire that destroyed it; what has survived are only the submerged parts and the archaeological finds that ended up in the water.
The last settlement, a few centuries more recent than the previous structures and datable to the recent Bronze Age (13th century BC), definitely marks the end of pile-dwelling constructions through the discovery of a six-meter-wide ballast. coming from a village (of which no trace remains) located on a neighboring hill, the Dos dei Gustinaci.

In the same area there are various testimonies of the prehistoric age, such as furnishings and work tools. It was the peat itself that kept these objects almost intact, allowing in very recent times the opening of the fascinating museum of pile dwellings in Fiavè.

The new Museum of pile dwellings in Fiavè has recently opened. The structure is built on two floors and presents a wide variety of archaeological evidence of the settlements; noteworthy is the presence of a container, baptized “Fiavè Cup“, the symbol of which has become part of the banner of the city.