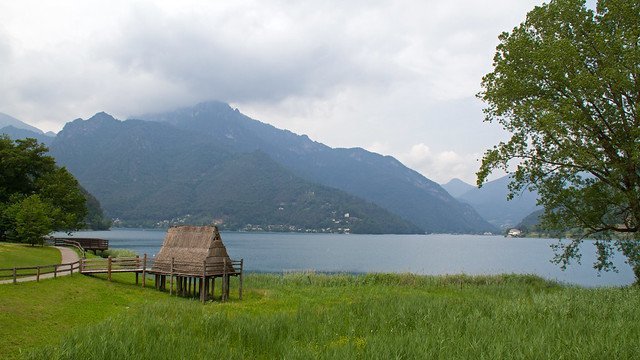 The Museo delle Palafitte di Ledro is an autonomous section of the Tridentine Museum of Natural Sciences located in Molina di Ledro, on the east bank of Lake Ledro.

The pile dwellings date back to the distant Bronze Age, that is to say over 4000 years ago, and were discovered in 1929 due to a temporary lowering of the waters of Lake Ledro due to the construction of a new hydroelectric plant near Riva del Garda.

Following the discovery, excavations were made, but the subsequent raising of the water level prevented its continuation.

It was only after the drought period of 1936-1937 that the waters dropped again and it was possible to resume excavations under the supervision of the University of Padua. After the university institute, the Tridentine Museum of Natural Sciences took care of the direction of the works; however, it was only at the end of the 1960s that the real Museum of the stilts of Lake Ledro was born.

The stilts are an archaeological find of world importance, to the point that they were declared a UNESCO World Heritage Site in 2011.

The museum exhibits not only the findings of stilts, but also numerous objects and tools dating back to the Bronze Age.

In the past there was the reconstruction of only one of the stilts built in antiquity, to be precise the “shaman’s hut“; in 2006 a portion of the village was added, built on the banks of an emissary stream from the lake.

The “village” is a real open-air educational center, in which the various finds are contextualized by placing them in their current environment and thus helping to understand prehistoric life more closely.

The museum, in the spring and autumn months, offers numerous educational and didactic activities.
During the summer, however, “Palafittando” is presented, an interesting cultural initiative consisting of a series of experimental archaeological laboratories, including, among other things, beautiful shows, concerts and themed events.