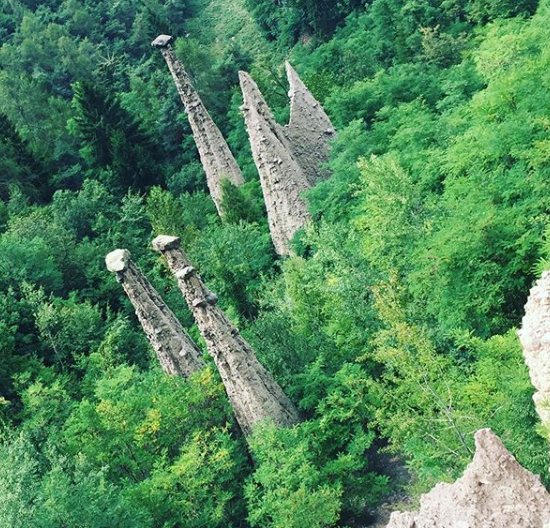 The Pyramids of Segonzano are called by the local people with a term that means “men”, due to their elongated shape and surmounted by a rounded rock formation that recalls the head in the stylized human figure.
These pyramids are land formations that can reach up to twenty meters in height. Their geological origin dates back to about 50,000 years ago, and they took shape from a moraine deposit, residue of the tongues of a glacier dating back to the Quaternary era: the deposit was subsequently eroded by run-off waters.
Their characteristic that makes them unique is their composition that sees small pebbles and earth merge, the pebbles are not all the same size but there are also very different diameters. All the debris has hardened over time, thanks also to the enormous pressure exerted by the glacier, and despite their almost cemented appearance they are easily eroded by rain and runoff waters.

Above the layer of earth and pebbles, the remains of a landslide had deposited, large porphyry boulders. Therefore, under the porphyry formations that stopped to form the head of the pyramids, under the time the deposit layer was washed away, but not under the porphyry boulders which with their weight made the underlying earthy formation even more compact and solid. Furthermore, the porphyry boulder not only acts with its weight, but also acts as an umbrella, or hat, to the underlying formation, sheltering it from rainwater.
These pyramids, also called Earth Pyramids, are located in Segonzano, a town in the province of Trento which is located in the Val di Cembra along the Alvisio bed, a small stream. The Pyramids of Segonzano are arranged in a row, according to an array that is called Organ Pipe, they are very characteristic and attract tourists and scholars every year, precisely because this phenomenon has only occurred in Segonzano and nowhere else in the whole of Trentino. . Their coloring is also very particular, they are all golden yellow and depends on the color of the morainic deposit earth. At the base of the pyramids you can find a thick presence of vegetation that includes roots, moss and foliage: depending on the density of the foliage, the erosion made by water is slowed down even if the earth pyramids are constantly changing.

The Pyramids can be visited throughout the year, in some periods with daily opening and in others with opening only during holidays, the ticket office is open from 9.00 to 18.00 and from there you can reach the Earth Pyramids along a very easy path which can be used by adults, the elderly and children.
Admission has a ticket cost of 3.00 euros per person for adults, while reduced admission tickets are available for seniors, children, school groups or simply large groups.

Those who are in Segonzano to admire the Earth Pyramids can also visit the town and its surroundings, where they can admire the natural beauty of the area along the numerous paths that make up the nature trail dedicated to Albrecht Durer, admire the artist’s watercolor paintings, but not only.
For example, you can visit the Sanctuary of the Madonna dell’Aiuto where a Marian painting is kept to which various miracles have been linked. Also very interesting are the remains of the Castle of Segonzano, which at the end of the eighteenth century was the scene of the battle between the Tyrolese and the Napoleonic troops who were defeated.
It is also interesting to immerse yourself in the manufactures, scents and flavors of the place, in fact in Segonzano apples, grapes, strawberries and blueberries are grown, wood and porphyry are processed and Muller Thurgau is produced.