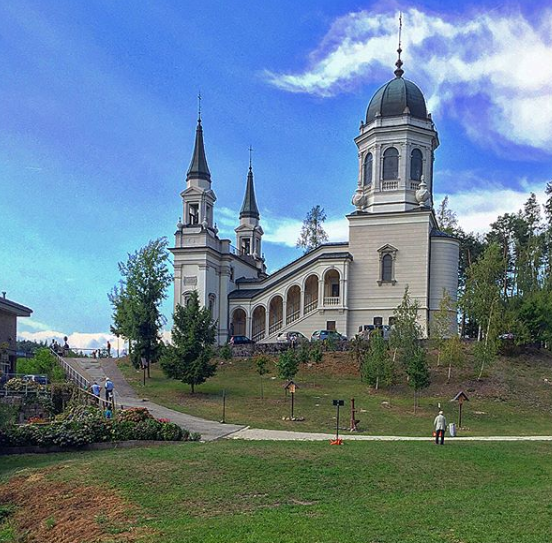 The sanctuary of Montagnaga, one of the best known and most popular in northern Italy, owes its fame to 5 apparitions of the Madonna, which took place between 1729 and 1730.

The story tells that Giacomo Moser, a farmer from Montagnaga, at the beginning of the eighteenth century, going several times to the Sanctuary of the Madonna di Caravaggio, returned from one of his travels with an image of the Madonna.
The farmer exhibited the painting on the altar of the church of Montagnaga, dedicated to St. Anna, and so every year to come, always on May 26th. The story of the graces and the celebrations of the Sanctuary of Caravaggio that Moser brought with him, aroused in many the desire to go to the famous Bergamo sanctuary; among all the devotees there was also a young woman named Domenica Targa, born in Guardia, a village near Montagnaga. The young woman, however, could not go to the Bergamo sanctuary because she could not obtain the consent of her parents. Thus it was that, in 1729, during the exhibition of the Madonna del Caravaggio, the Madonna appeared to the young woman, to give her the strength to talk to her parents and persuade them to consent to the pilgrimage.

Over time, the Church of S. Anna was restored and enlarged, and still retains the painting of the Madonna del Caravaggio. In the valley of the apparitions, however, at the end of the nineteenth century, the villagers placed a bronze sculpture depicting the Madonna, in life size, and a monument dedicated to Christ the Redeemer. The church, which has a Latin cross plan, is surmounted by a copper dome. The internal walls, where once the ex voto were located, now housed in reserved spaces near the altar to the Madonna and in a special ex voto room, are decorated with 16 large canvases painted by many artists of the eighteenth and nineteenth centuries . Behind the main baroque altar dedicated to St. Anna, visitors can admire the canvas by Francesco Unterberger da Cavalese, painted in 1747 and depicting a scene with the Madonna and Jesus. Exposed to the east is the altar of the Madonna di Caravaggio. A third altar is located in the left transept and is dedicated to the Madonna del Carmine and S. Antonio. The confession room houses the altar dedicated to the Virgin of Sorrows.

Many details on the apparitions are preserved in the Acts of the Process that the Bishop of Trento instituted in 1730, after the first apparition in Montagnaga. Once the ecclesiastical investigation was completed, the works of enlargement and consecration of the Sanctuary, for a long time the traces of these papers were lost, until, in 1893, a priest found the two manuscripts of 1730 in the municipal library of Trento . The first reports the account of the Apparitions and the events that took place between 1729 and 1730 with reference to the ecclesiastical process, while the second reports the minutes in full.

The sanctuary is very popular throughout the year, with some moments of great turnout in the summer months and during the day of Pentecost, celebrated both in South Tyrol and in the German-speaking European countries. But the sanctuary is also a good excuse to visit the Montagnana area and to spend an outdoor holiday. In the surroundings there are paths and thematic routes, such as the one that leads to the valley where the apparitions took place. The trails and activities in the area are suitable for the whole family, even older people.

Free guided tours are organized in the Sanctuary, which can also be booked shortly in advance.