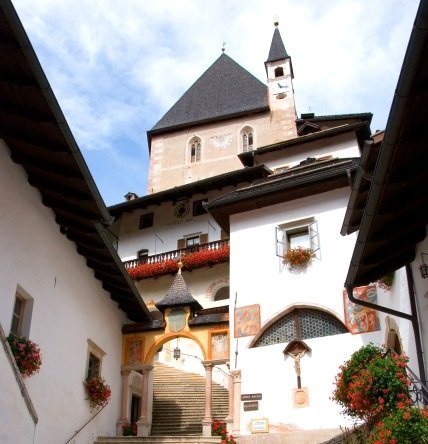 In Sanzeno, a hamlet of the small town of Coredo, in Val di Non, we find an important example of a Christian hermitage: the Sanctuary of San Romedio.

Lying on a steep rocky spur, at an altitude of about 730 meters, and immersed in a natural setting of rare beauty, the Sanctuary is dedicated to San Romedio di Thaur, a hermit who lived between 330 and 405.
According to the devotional legend, Romedio, while on his way to visit Virgilio, Bishop of Trento, was attacked by a ferocious bear who tore his horse to pieces. The anchorite, however, was not frightened and did not lose heart: he made the big animal crouch, saddled it, mounted it and resumed its journey, accompanied by a cheerful flock of birds.

Romedio spent his last years of life on the spur of rock that takes his name and, right above his mortal remains, at the end of the 10th century, a small church-chapel was built in his honor.
For about five hundred years the rock, already characterized by the long staircase, remained bare, then, in 1487, the church of San Giorgio was built. These first buildings were followed, in the first half of the sixteenth century, by a chapel decorated by Adriano Mair and dedicated to San Michele, and a further church, dedicated to San Romedio, famous for hosting a superb canvas made in the late seventeenth century.
Later, during the eighteenth century, the entire complex was remodeled and modernized; furthermore, the last part of the staircase was embellished with some beautiful aedicules dedicated to the mysteries of the Passion of Christ.
The architectural complex, considered one of the most characteristic and daring in Europe, was completed in 1923 with the Chapel of the Addolorata, an ex voto of the veterans of the First World War,

The Sanctuary of San Romedio, currently guarded by the Franciscan Friars, is a place out of time, wrapped in silence and immersed in a particular atmosphere, of mystical peace and serenity.
If you want to enjoy this tranquility, find yourself and pray in solitude, you can spend a few days at the Guest House of the Sanctuary.
The Foresteria, open all year round, is a simple and essential place, typically Franciscan, with eight beds – not provided with linen – a refectory and a small chapel where it is possible to retire in prayer.

The best and most suggestive way to get to the Sanctuary is, of course, the pilgrimage.

The hermitage can be reached via a scenic staircase with 130 steps. The most fascinating itinerary includes, as a starting point, the Rhaetian Museum of Sanzeno, an interesting archaeological museum that tells the story of the Val di Non from the Ice Age to the Middle Ages.
From here, you can follow along a wooden walkway that runs along the countryside and the irrigation canal. The walk, just under 3 km long, then develops into the rock until it reaches the eighth station of the remarkable marble Via Crucis.
Alternatively, from the nearby village of Don, you can take the path called SAT 539, or pass through the Tavon or Coredo woods.

Eucharistic services are regularly celebrated at the Shrine. You can attend the Holy Mass every day at 4 pm, and on Sunday, and on holidays at 9 am and 11 am.

It should be remembered that every January 15th San Romedio has been celebrated since time immemorial. On that day, at the Sanctuary it is possible to obtain the “Perdon” of Sanzeno. For the occasion, the traditional pilgrim’s dish is prepared in the houses: tripe.