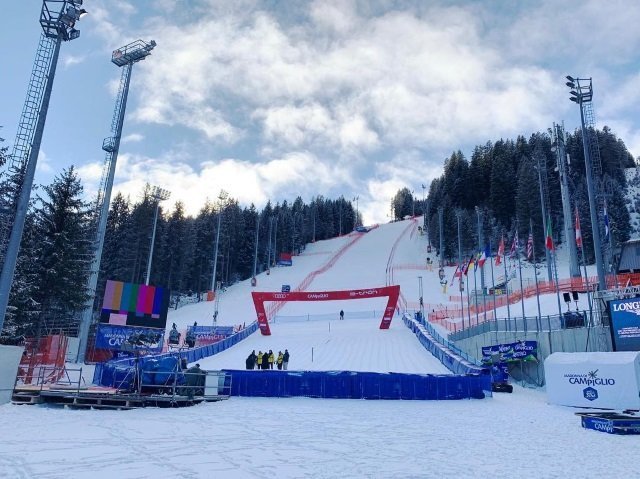 Madonna di Campiglio is a well-known alpine ski resort and, among the more than 60 kilometers of slopes that it can boast, there is one that is particularly known: the 3 -Tre slope, which is also called the “Scala of skiing “.

The origin of the name:
The original name derives from a contraction of “Three races in Trentino” because in 1950 this route concluded a three-day race that had the Trentino mountains as its backdrop. It was from then on that spectacular winter sports competitions among the most famous in Europe began to be played.

Where is it located:
The track occupies the area known as the Canalone Miramonti which ends directly in the town of Madonna di Campiglio and which starts from an altitude of 1,725 meters.

Bruno Detassis’ project
Its creation was part of a 1940 project drawn up by Bruno Detassis, the famous mountaineer and ski instructor who opened more than 200 routes in the Brenta Dolomites, but the outbreak of the war forced to postpone the preparation, despite the route anyway some competitions of the 1941 Littoriali were held (sporting events reserved for university students). It had to wait until 1949 for the Detassis project to be completed and immediately an attempt was made to create a path that could be considered so selective as to be inserted among the tracks of international level.

Detassis was right. From that moment on, trying their hand at 3 – Tre became a real must for those who believed themselves to be the best skiers in the world. There is no champion of the past who has been able to resist the attraction of 3 – Tre, but the challenge to the Canalone Miramonti has not always brought satisfaction to the athletes and there were several who did not know how to complete the descent or who obtained mediocre times. .

The characteristics of the track
The track, with its 180 meters of altitude difference over a length of 470, is one of the most selective in the world with an average gradient of 27% but which in some points reaches 60% and is ideal for special slalom races. with sudden changes of direction that require great technical skills. Great champions of the past such as Zeno Colò descended on it and won; then in 1967, at the time of the birth of the international World Cup circuit, it was included among the world tracks and remained so until 2005. The first world race saw the supremacy of three French skiers, Perillat, Jauffret and Lacroix, later it was the turn of two of the spearheads of our “blue avalanche”, Piero Gros and Gustav Thoeni, then in more recent years Alberto Tomba and Giorgio Rocca.

The 3 – Tre is a very difficult red slope that is recommended only for very expert skiers who can also try their hand at night descents, thanks to the perfect lighting. There are significant and sudden changes in slope, in the central part there are some steps and a couple of changes of direction that require great attention, but the thrill of emulating the “greats” of skiing is unique.
If instead of going down this difficult path, you prefer to watch the arrival of the races (in the absence of those of the World Cup, there are still those of the European Cup) it should be remembered that the space for the public has been expanded and that they are well three ticket offices from which you can access the finish line. Next to it, the municipality has set up Village 3, a corner where collateral events take place and which during the Christmas period is animated by the typical markets.