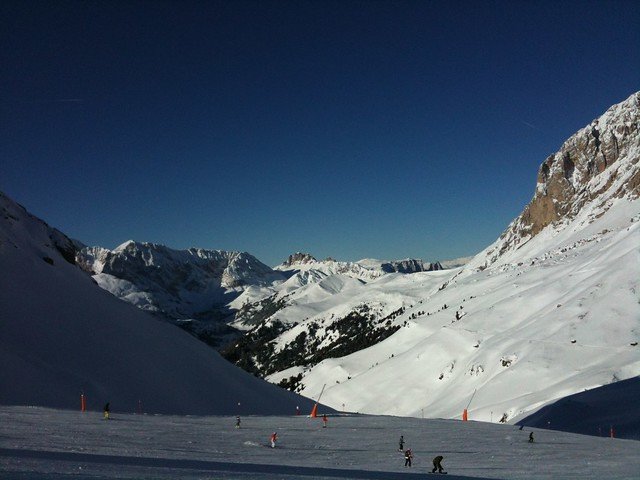 Trentino is an infinite resource of wonderful nature, welcoming people and enchanting views. From the snow-capped peaks to the wide valleys, Trentino offers a surprising amount of territories to visit and in which to spend your holidays in both summer and winter.

ALPINE SKIING:
Among the evocative high mountain scenery of the region there is the Val di Fassa, which has over 200 km of slopes equipped with the best state-of-the-art equipment.
The district includes 9 ski areas, 86 ski lifts, 115 slopes and a high-tech programmed snow-making system which will make it possible to ski safely throughout the entire season.
The 220 km of downhill slopes in the Val di Fassa connect the area to the nearby valleys of the Sella group, as well as to the skiable 500 km of the Dolomiti Superski circuit.

Val di Fassa is a truly unforgettable location both for the care with which the slopes are maintained and for the abundance of enchanting natural panoramas on the most famous peaks of the Dolomites.
There are 2 ski passes that allow you to ski throughout the area:

1: Val di Fassa / Carezza, which is valid for all ski lifts from Canazei to the Costalunga Pass;
2: the Trevalli, valid in the Moena – Val di Fiemme area.

Ski lovers will be amply satisfied with the vast offer of Val di Fassa.
For those who love to spend the whole day on skis, the area offers various thematic routes that develop between legendary peaks: in addition to the famous Sellaronda it is possible to perform the Panorama skitour, the Giro della Grande Guerra, that of the Three Valleys or the suggestive tour of Emotions.
It will also be possible to ski at night thanks to the lighting systems that cover part of the ski slopes.

CROSS COUNTRY SKIING:
The Val di Fassa is also equipped with numerous tracks used for the practice of Nordic skiing, both in the valley floor and at 2000 meters of altitude in the Ciampac area, for a total of over 50 km of slopes that develop between rings and routes on the route of the Marcialonga.

SNOWBOARD:
Even the practice of snowboarding is possible in the area: half pipes and rails will be the maximum fun for lovers of this sport.

FAMILIES AND CHILDREN:
Families with children, on the other hand, can take advantage of the funparks, special playgrounds on the snow, as well as the competent ski instructors made available by the schools.

BEYOND SKI:
Val di Fassa, however, is not just a sporting activity.
In addition to skiing, you can in fact devote yourself to gastronomy, to learn about the Ladin culture and to visit the enchanting villages that dot the area and which will make your stay unique.