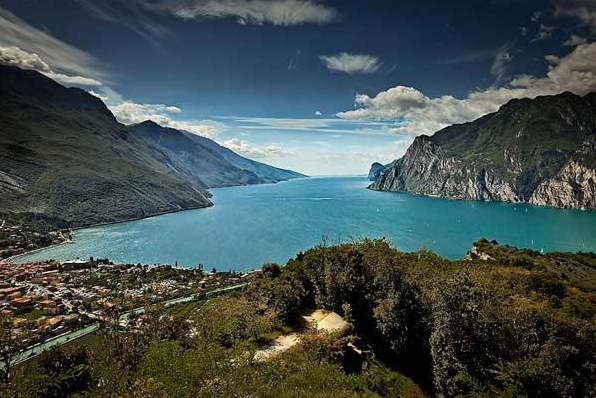 Garda is the largest lake in Italy, of mountain origin, but which is oriented towards the Po Valley.
It can be interesting for the tourist to know the movements and the influence of the winds that blow on the lake, whose peculiarity is their constancy of time, which allows the tourist to know exactly when to use it for sailing activities.

Typically the wind is determined thanks to a displacement of air caused by the difference in pressure: the air goes from the high to the low pressure area, and since Lake Garda is nestled between mountains and plains, the winds that blow in this particular locations arise mostly from the meteorological interactions that are established in these two types of reality.

Two winds of a thermal nature blow mainly on Lake Garda, that is, the nature of which is directly linked to the heating of land and water.

The two winds alternate throughout the day: the Pelèr blows from north to south in the morning, while the Ora blows from south to north in the afternoon.

The Ora is not a wind that generates particular movement of the water on the lake, therefore ideal for beginners and starts blowing around noon, to go on, in favorable weather conditions, until sunset.

The area where it blows with greater intensity is the upper Garda area, thanks to the orographic conformation of the surrounding area that causes the Venturi effect: the wind can blow even over 10 m / s causing a wave motion.
It is mostly formed by small winds that blow between Gargnano and Brenzone and which join together in this part of the lake. The very regular action of this wind is concentrated mostly in the spring months to lessen in early summer, when the very hot climate attenuates the temperature difference between day and night.

The moments of maximum passage are realized thanks to a strong irradiation that the sun exerts both on the water of the lake and on the nearby mountains that extend north of Garda. For this reason, on overcast days, when the clouds cover the sun, the Ora tends to fade considerably, almost to a stop.

The most experienced sailors learn to recognize these winds, which often change from shore to shore.
Observing the Garda you can also learn to predict future weather conditions and guess what wind it is.

Often it can happen, in summer, that due to a daytime storm it can lead to an inversion of the winds causing very violent movements.

The areas where it blows more intensely are in the north, in Brenzone, the intensity reaches up to ½ bft, Campione ¾ bft and Torbole to 4/5 bft.
In general, the further north you go the more the speed increases due to the mountains that narrow around the lake.