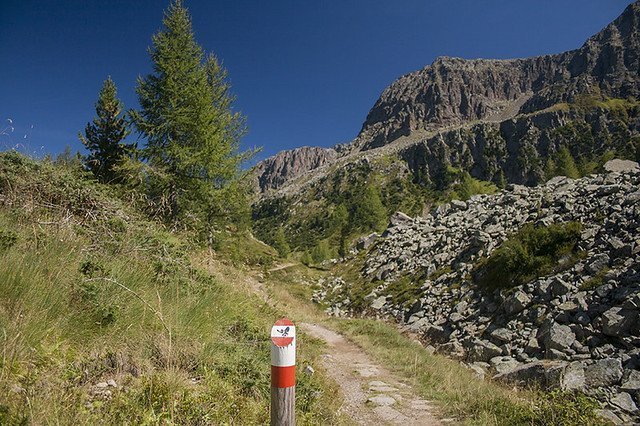 Trentino is a land endowed with a spectacular nature, but also with an enviable historical heritage, especially in reference to the finds dating back to the First World War.

A unique opportunity to combine the passion for history with that for hiking is the Path of Peace, a route that runs through the most important places of the Great War in Trentino.

The route, over 520 kilometers long, connects the Tonale Pass to the Marmolada and was built between 1986 and 1991 by the Consorzio Lavoro Ambiente and the Environmental Restoration and Enhancement Service of the Province of Trento.

The diligent work led to the construction of a wide excursion route developed in a completely exceptional context: passing along mountain paths and former military roads, it is possible to reach places of exceptional historical-naturalistic importance.

THE PATH OF THE PATH OF PEACE:
The route is marked by a signpost with a yellow dove, it is divided into seven reference areas, namely:
1. Tratto Tonale – Gruppo Presanella;

To celebrate the centenary of the Great War, the Province of Trento has developed a program of recovery and rearrangement of the route, which will consist in a further adjustment of the path, in the positioning of new signs, but also of other initiatives such as the enhancement for tourism purposes through the exit of a book and a guide on the subject.
The project is coordinated by Engineer Claudio Fabbro and carried out by the Nature Conservation and Environmental Enhancement Service, with the patronage of the Department of Culture of the Province of Trento.

The maintenance works, which have come to an end for almost the entire route, are expected to end in the summer of 2014 in the Riva – Tonale section only.
Any further information on the Path of Peace as well as on the finds of the First World War present in Trentino can be easily found through the Italian War History Museum in Rovereto.