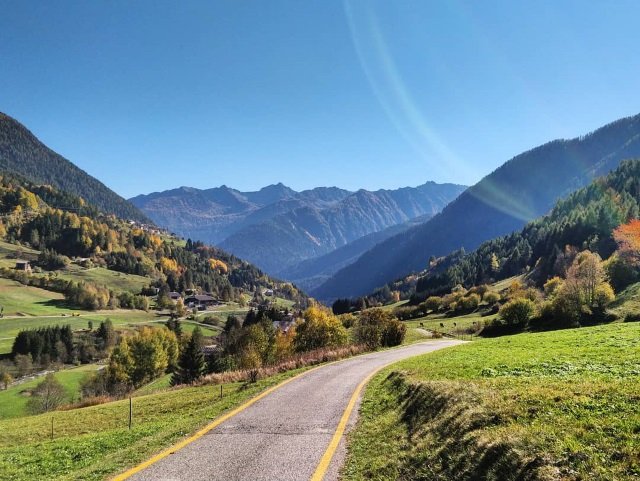 The Val di Sole cycle path is a magnificent reality in Trentino, an alternative way to admire the beauty of its places along a path that can be traveled on one’s own two-wheeled vehicles.

The cycle path covers the length of 35 km, developing almost entirely along the bed of the river Noce, and covering a total height difference of about 550 meters: from 595 meters above sea level. from the town of Mostizzolo you reach up to 1160 in Cogolo, located in the Val di Peio.

The route is amazing not only for the beauty of its landscapes, but also for the exclusivity offered by an exceptional route: the cycle path develops along ancient roads connecting mountain villages and different areas of the valleys, as well as along very valuable embankments or roads located in the open countryside.

Kilometer 0 of this cycle path is located at the Mostizzolo bridge, near the railway station of the Trento-Malè connection. Already from the first images offered by the route it is easy to understand its profound beauty: the gorge crossed by the bridge, the mouth of the Noce river in Lake Santa Giustina and the nearby fir forest contribute to making the features offered by the landscape of a peculiarly alpine style.

The first encounter with the evergreen forest gradually gives way to a wide countryside covered with beautiful orchards and green meadows up to Malè, a fine town that serves as the capital of the Val di Sole. The course of the Noce leads the track along Cavizzana and its flourishing orchards up to admire Castel Caldes and the Rocca di Samoclevo, the ruin of a 12th century keep.

After “le Contre”, a rest stop where you can use sports equipment, follow the Noce up to its confluence with the Rabbies stream and finally to the town of Malè, not crossed by the track as it is located on a higher level; it is however possible to detour and visit the town to find a pleasant refreshment and enjoy a little relaxation.

At the fifteenth kilometer you will find the village of Dimaro, followed by that of Piano and Mezzana. A long stretch along wide countryside and along small villages leads to the new bicigrill and subsequently Fucine, between the Val di Sole and the Val di Peio. It is now a few kilometers from the end of the route, at an altitude of almost a thousand meters. The views and landscapes are truly wonderful, and the fatigue caused by the long route is continually mitigated by the beauty of the natural sceneries that accompany the cycling route. After Fucine you cross a fragment of the Val di Peio, whose narrow path obliges you to cross the river Noce repeatedly, and then ends with a short stretch until you reach the town of Cogolo, the final destination of the route.

Reaching the cycle path is very simple, especially thanks to the special Dolomiti Express train (equipped for the transport of 80 bicycles) along the Mostizzolo-Marilleva route, as well as thanks to the Bicibus service operating from 26 June to 2 September and available on the Marilleva 900 route. -Cogolo di Peio.