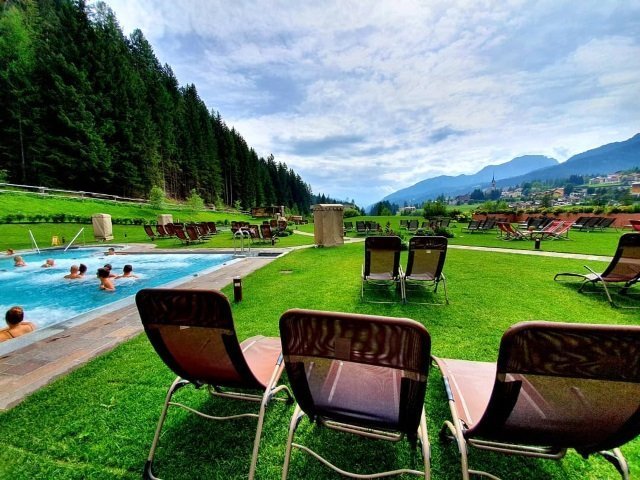 Trentino has numerous spas that are very diversified from each other, and all located in dreamlike natural contexts.
The waters of Trentino are in fact renowned throughout Europe for their curative properties, many of which have been used since the Roman period; their fame grew in the Middle Ages and was then used, in more recent times, even by the Habsburg family.

The thermal waters, thanks to their special quality, make it possible to treat various skin diseases such as psoriasis and dermatitis, as well as circulatory, respiratory, digestive and arthroeumatic diseases.

The main spas in the Valsugana area, equipped with arsenical-ferruginous waters, are:

(A) Levico Terme: perhaps the most famous spa in Trentino, it is located in a natural landscape between the Levico and Caldonazzo lakes and is particularly suitable for mud baths, balneotherapy and aerosol;
(B) Vetriolo Terme: located a few kilometers from Levico, it shares thermal water and therefore its therapeutic properties with this center;
(C) Roncegno: on the slopes of Mount Fravòrt, the place has an important beauty farm as well as hotels and wellness centers equipped with numerous massages and beauty treatments.

In the Val di Sole, on the other hand, there are:

(D) Pejo: located at almost 1400 meters above sea level, and the Pejo thermal baths are in an exceptional natural location as they are in the heart of the Stelvio Natural Park;
(E) Rabbi: also located in the Stelvio, Rabbi is known throughout Europe for its beneficial activities on rheumatism and circulation.

To the stations listed above we can add that of (F) Comano, located in the Giudicarie and very appreciated for the healing properties of the skin and respiratory tract.

Alongside the classic thermal therapies, Trentino has establishments in which it is possible to make the so-called grass baths (or phytobalneotherapy), that is to say immersions in freshly cut grass and then in fermentation. This technique is an evolution of the most ancient “hay baths” and is used to treat rheumatoid and post-traumatic disorders; the best known center for such therapies is (G) Garniga, located in the middle of Monte Bondone. The Garniga thermal baths are currently undergoing restyling and will only be reopened to the public in 2014.