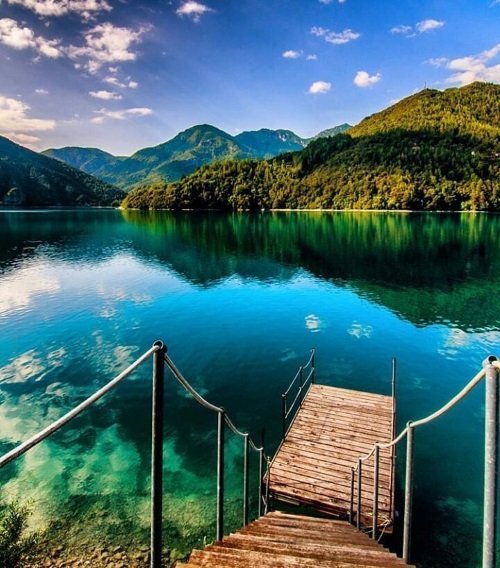 Lake Ledro is a body of water located in the homonymous valley, which joins the Chiese valley with Lake Garda.
At a height of 655 meters above sea level, it has a maximum depth of 48 meters and a circumference of almost 12 km.

The lake was born from a morainic barrier and the particular cleanliness of the waters gives it a characteristic green-blue color, as well as an important reputation in the tourism sector.

Because of the position in which the Ledro Valley is located, that is to say halfway between the mild climate of Lake Garda and the more typically alpine climate of the nearby Lake Idro, the surrounding flora is widely diversified; in fact, it ranges from holm oak to edelweiss, from Scots pine to hazelnut, from silver fir to the undergrowth of ferns, mushrooms and berries.

Lake Ledro is an important tourist destination in the summer season: its shores are in fact filled with visitors from all over Europe and eager to spend time among the well-equipped bathing establishments and the surrounding nature.

It should also be noted that one of the beaches on the lake is accessible to dogs, thus making it possible to bring the best four-legged friends with you.

In a series of periods such as in the eighties, in the autumn of 2009 and in November 2011, the water of part of Lake Ledro has taken on a suggestive red color following the flowering of a particular type of alga in its waters.

In 1929, a lowering of the lake water level made it possible to identify the remains of an ancient pile-dwelling village, dating back to the distant Bronze Age and currently becoming a UNESCO World Heritage Site.
Lake Ledro is in fact an archaeological site of global significance, and this has led to the construction of a museum as well as the reconstruction on its banks of a stilt house similar to those built in prehistoric times.

As well as from a historical and naturalistic point of view, Lake Ledro is a popular tourist destination for lovers of water sports and more.
It is in fact possible to practice sailing, windsurfing, canoeing as well as fishing; Thanks to the presence of numerous marked trails, excursions can also be made on foot or by mountain bike, through which it is possible to fully appreciate the natural beauty of the characteristic Valle di Ledro.