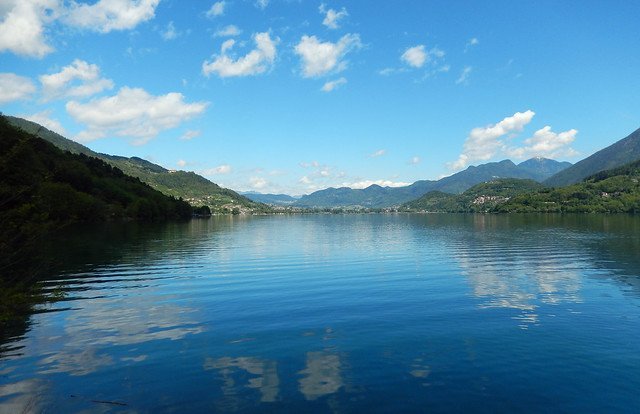 Lake Caldonazzo is the largest of the lakes found entirely in Trentino, as well as the most famous.
The lake stretches, with its 5 km of length and 5.62 sq km of surface for an average depth of 26.5 meters, on the large homonymous plain dotted with orchards and small, typical Trentino villages.

Until two centuries ago, the body of water was even wider: the size of the lake was such as to reach the city of Pergine, but later the reclamation of many surrounding marshes caused a reduction of the surface to its current size. The average temperatures of the lake waters are particularly favorable for bathing: around 20 ° C in June, 23 ° C in July and 24 ° C August, make Caldonazzo one of the hottest lakes in southern Europe, easily attracting a large number of swimmers. to long swims.

The municipalities of Caldonazzo, Calceranica al Lago, Pergine Valsugana and Tenna offer numerous free beaches as well as bathing establishments to meet the large number of tourists who periodically find the lake one of the ideal destinations for their holidays.

Yet Lake Caldonazzo is not only famous as a bathing resort. It is in fact an open-air training ground for all summer and water sports, and in particular: canoeing, windsurfing, rowing, sailing and scuba diving.

Further mention should be made of water skiing and fishing.

The second activity has great luck especially due to the abundance and diversity of species of grazes present in the lake waters: trout, carp, rudd, tench and sunfish are more than enough reasons to arm yourself with fishing rod and go to the lake.

As far as water skiing is concerned, that of Caldonazzo is one of the very few lakes on which it is possible to practice it; precisely for these reasons, it currently has the important role of “gymnasium” of the Trentino champion Thomas Degasperi, current European and World Champion of water skiing in the slalom specialty.

Thanks to the presence of numerous services, it will be very easy to try water sports such as canoes, pedal boats or (in suitable periods), even water skiing itself. If, on the other hand, you want to take advantage of a break from the water, the beautiful cycle path that runs along the lake and extends for about 10 km towards Pergine invites you to take your mountain bike, to go jogging or a simple walk.

Lake Caldonazzo is also the center of numerous activities, such as the Dragon Boat, a competition between long boats moved by a large number of rowers, and the Faculty Games, organized by the University Sports Center of the nearby University of Trento.