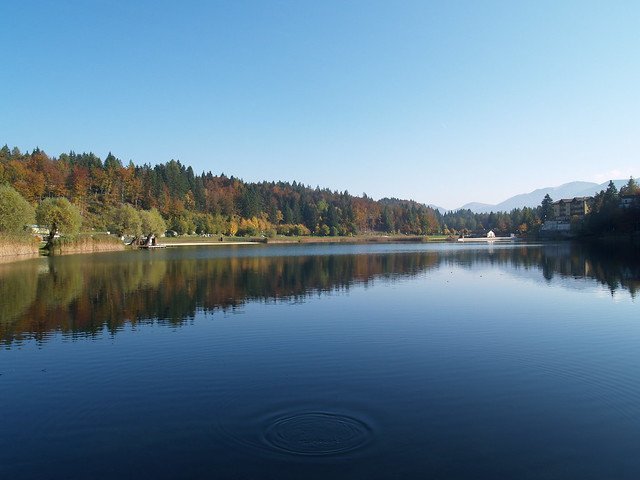 Lake Lavarone is a small body of water located on the homonymous, enchanting plateau at almost 1100 meters above sea level.
It is one of the oldest lakes in all the Alps: its origin can even date back to the third century BC.

With an area of 64,000 m² and a depth of 17 meters at the highest point, it is constantly fed by several small springs that flow at the surface level. The waters of the lake also infiltrate the soil and form the Vallempach waterfalls in the Centa valley over 3 km away.

The stretch of water is greatly appreciated by tourists thanks to its mild climate and the purity of its waters.
This meant that the place was equipped, during the summer, with various facilities for bathing and fishing, while it becomes an ice skating rink during most of the winter.
Lake Lavarone is also home to internships for learning how to rescue under the ice since 1985 by the National Association of Underwater Instructors.

It is possible to access the lake directly by car, or by taking a pleasant walk that originates in the Chiesa locality, near the Hotel Du Lac.
Another path to reach it is the one that, always starting from Chiesa, moves along the Prombis path and approaches the climbing wall.
This last path, once it reaches the lake, accompanies it along the entire perimeter, allowing you to fully enjoy the landscape.

The locality was already known to the Viennese aristocracy due to its remarkable beauty and the healthiness of the environment.
It seems that even Sigmund Freud loved to spend part of his holidays in Lavarone, particularly appreciating the natural scenery and the enchanting walks offered by the place.

Like so many natural places of great beauty, Lake Lavarone is accompanied by a legend about its origins.

THE LEGEND:
In fact, it is said that, in the area where the lake currently stands, there was once a prosperous wood belonging to two quarrelsome brothers.
One day the two had a more bitter discussion than usual and argued till they were exhausted about who the real owner of the place was.
God, a sad spectator of the whole dispute, was greatly irritated by the family struggle and decided to punish the quarrels by making the whole wood sink during the night, and filling the pit once covered with fir trees with water.
From that night, the lake was born.