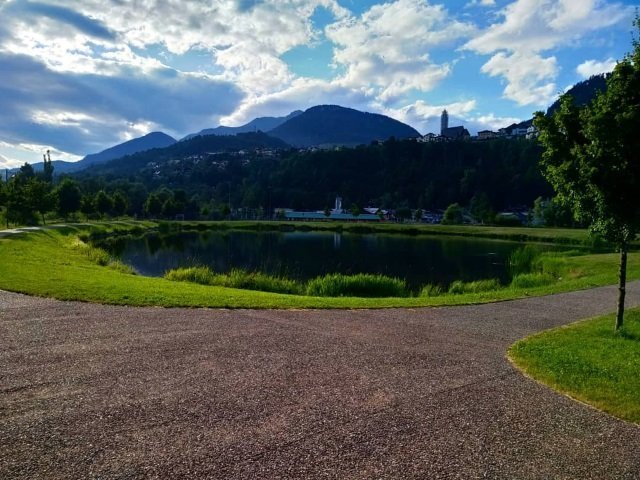 Tesero is a small town in the Val di Fiemme of just under 3,000 inhabitants, and its lake is its flagship.

Due to a favorable geographical position and adequate technological equipment that allow optimal use of programmed snow as well as one of the most advanced artificial snow systems in all of Italy, Lake Tesero has been home to its famous Cross Country Center for over half a century.

In fact, for more than fifty years, from December until at least the late half of March, it is possible to practice cross-country skiing despite the relatively low altitude of the place (about 850 meters above sea level).
Thanks to a modern lighting system, it is also possible to ski in the evening on a 2-kilometer course, providing the system for a total of 18 km of slopes.

The great fame and efficiency of the Tesero Cross Country Ski Center made it the venue for the 1991, 2003 and 2013 world championships. In particular, on the occasion of the Nordic Ski World Championship, the nearby stadium underwent important restyling interventions aimed at obtaining numerous improvements both in terms of tracks and structurally.

In the wake of upcoming events of global importance, a warehouse of almost 2 thousand square meters was built near the stadium, used during the events as a coordination center for television production means, as well as a building equipped with booths for TV commentators, one for the press room, a roller ski track and a shooting range for biathlon.

The cross-country ski runs are divided as follows: 10 kilometers for the classic technique, as many for the free technique and 2 kilometers equipped with night lighting.

In addition to the Lago di Tesero cross-country ski center, the lake itself is a source of sporting and tourist attraction. In fact, there is a recreation center equipped with sport fishing facilities, while in more recent times (in 2006) the first Nordic Walking Park in the whole of Trentino was opened near the lake; the route has over 60 km of marked trails.

Furthermore, the Marcialonga track passes through Lake Tesero, which in summer becomes a beautiful cycle path that crosses the Fassa and Fiemme valleys.