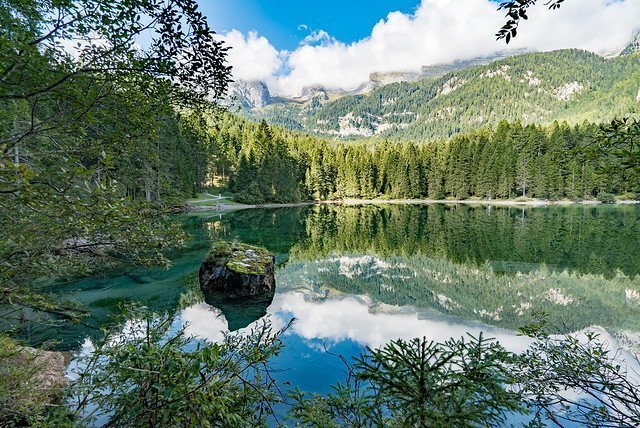 “The legend of Lake Tovel tells of love and war, a story that took place hundreds of years ago, whose protagonist is a beautiful princess named Tresenga, from the kingdom of Ragoli. Tresenga, after rejecting the romantic proposals of Lavinius, a bloodthirsty prince, had to face the violent revenge of his suitor who led his personal army against the kingdom of the princess. The citizens of Ragoli fought valiantly alongside their princess, but one by one they perished, leaving Tresenga to its fatal fate. From that day of struggle and death, the waters of the lake were colored with the blood of the fighters for many years. “
But this is just a legend …

Lake Tovel is in fact a beautiful alpine lake located within the Adamello-Brenta Natural Park, near the town of Tuenno, in the province of Trento. A place capable of arousing only positive and peaceful emotions.
About one kilometer long by 500 m wide, with an almost triangular shape, the lake, of glacial origin, is surrounded by dense forests of spruce, Scots pine and silver fir, which form a perfect frame for the panorama of the Brenta Dolomites .

During the summer, until the mid-1960s, the lake dressed its waters in a vermilion / red color; contrary to popular legends, its redness was a natural phenomenon due to the presence of some algae with a particular pigmentation.
This single-celled microscopic organism, called Sanguineum Glenodinium, has made the biotope of Lake Tovel one of the most famous in the world.

Unfortunately, in recent decades the phenomenon has no longer occurred, alarming scientists and onlookers, who have begun to investigate the disappearance of the phenomenon and for years have carried out tests and samples in search of some clues, but none have been until now. able to explain exactly the reason for the disappearance of the phenomenon.
It has been hypothesized that the algae could no longer find nourishment, in particular nitrogen and phosphorus, due to the strong reduction in the use of the surrounding area as cattle grazing.

Leaving the memory of the Red Lake to the stories and photographs exhibited in the surroundings, it is still an exciting place: the panorama that can be admired from the benches along its banks is majestic and satisfying.

A beautiful path surrounds the lake allowing you to appreciate the beauty of the alpine flora; here we often meet toads, frogs and other animals, ready to jump away as the visitor passes. The forest around the lake is quiet and clean; the signs of the presence of man are almost imperceptible.

In addition to the amphibians and the typical animals of the coniferous forests, we find the chamois and the golden eagle.
The lake area is rich in birds and the streams rich in fish, including arctic char.

To fish in the lake you need a permit that can be purchased in the town of Tuenno or directly at the hotel on the coast of the lake itself.
The most important animal species of the Val di Tovel, however, remains the brown bear, which has found ideal living conditions there.
In fact, the Val di Tovel is considered one of the most important areas for the conservation of the Trentino bear population.

The lake is 11 km from Tuenno and can be reached by car, stopping at the parking lot a few hundred meters from the lake. The road is well maintained, paved and has no heavy traffic.