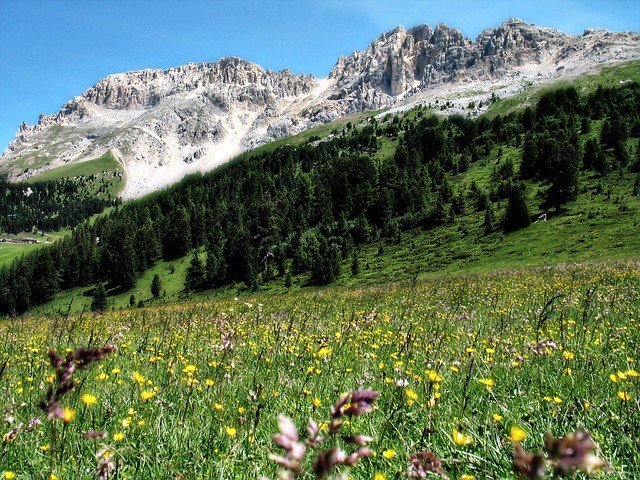 Alpe di Pampeago is a mountain peak in Trentino Alto Adige.
The nearby Passo di Pampeago is located at a height of 1983 meters above sea level, and divides the Selva di Ega and the Cima di Valdorsa, placing itself on the dividing line of the provinces of Trento and Bolzano, in the heart of the Dolomites.

The Pampeago Pass joins the Val di Fiemme with that of Ega, and on its southern side stands the Alpe di Pampeago, famous both from a skiing point of view, for the presence of the Latemar Ski Center, and from the cycling one.

Indeed, the Alpe di Pampeago (in particular on its best known side, that of Tesero) was point of arrival of numerous stages of the Giro d’Italia such as those of 1998 and 1999, years in which the famous “pirate” Marco Pantani and the Russian Pavel Tonkov fought for the first position.
The side includes a difference in height of about 800 meters in almost 8 kilometers, with a gradient of about 10% for most of the route with the exception of the last part, which is extremely difficult.

From the point of view of skiing, the Latemar Ski Center is one of the main ski areas not only in the whole of South Tyrol, but also in the whole of Italy.
It is mainly based in the localities of Obereggen (located in the municipality of Nova Ponente in Alto Adige), Pampeago (municipality of Tesero in Trentino) and Predazzo, and includes 48 kilometers of routes divided into 18 well-equipped ski lifts.
The Ski Center was built in 1970 and the lifts are a practicable route without ever taking the skis off your feet.

Obereggen is currently one of the most interesting ski resorts in Trentino Alto Adige, both for its peculiar characteristics and for the easy connection with the surrounding structures. Each track is equipped with artificial snow, in order to maintain an optimal level of snow in all weather conditions.

In addition to the winter attractions, the Pampeago alp is an excellent starting point for visiting the surrounding nature either on foot or, of course, by mountain bike.

Thanks to the numerous paths it is in fact possible to visit the alpine landscape even for less experienced hikers, also through free guided tours of easy and medium level.

The mild summer climate and the nearby woods allow you to carry out many outdoor activities on the Alpe di Pampeago and immerse yourself in the peaceful and relaxing nature of the Trentino Dolomites.