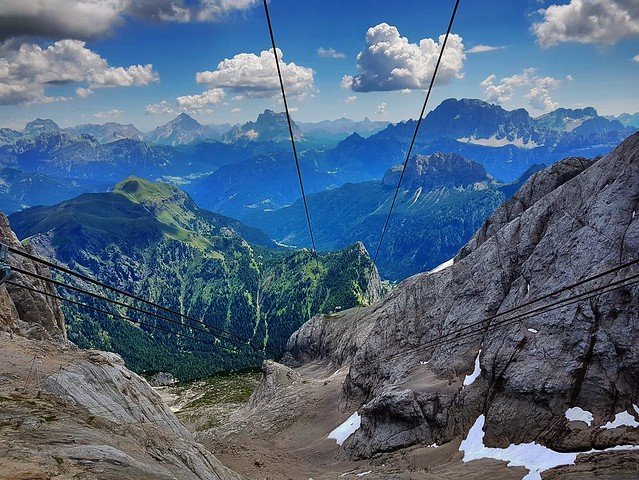 The Marmolada is one of the best known and most striking mountain groups in the Alps and it is no coincidence that it is called the Queen of the Dolomites.

Where is it located?
It unravels partly in the province of Belluno and partly in that of Trento reaching the highest point with Punta Penia which extends up to 3,343 meters above the sea level.

Characteristics and geographical classification:
A feature that differentiates it from the other mountains that form the Dolomites, are the limestone-type rocks with volcanic parts and not formed by dolomite.
Geographically, the Marmolada has been divided by the SOUISIA which is nothing more than a system of geographical classification, into seven well-defined mountain subgroups. The first subgroup is the Padoan chain, then there is the Marmolada massif, then the Ombretta – Ombrettola subgroup, the Auta chain, the Cima dell’Uomo chain, the Collac – Buffaure subgroup and finally the Monzoni – Vallaccia subgroup. .

Practicable sports
Various winter and non-winter sports can be practiced, such as mountaineering, alpine skiing, Nordic skiing, snowboarding and many others including cycling as the Marmolada has often been the scene of legendary stages of the Giro d’Italia and beyond.
It is important to underline that in the Marmolada, the presence of infrastructure is truly remarkable and well conceived, with rescue points present in all the various areas, paths to follow to make splendid walks admiring the beauties of nature, shelters, refreshment points and much other.
As for the ski facilities, you can easily access the Abba area or take advantage of the beautiful track that goes from Punta Rocca to over 3,000 meters high up to Malga Ciapella for a total height difference of over one thousand and five hundred meters and a total length of 12 kilometers. Among other things, in this part of the Dolomites, professional alpine skiing competitions at European level are held every year in various specialties such as slalom and giant slalom.

Itineraries:
Among the possible itineraries to follow to spend beautiful days outdoors we point out the so-called Via Ferrata della Marmolada. A fairly comfortable route, which unfolds for several kilometers through which you can reach one of the most beautiful peaks of the mountain range without too much effort.
It can be undertaken from different sides and to be precise from the Val Ombretta located in the southern part of the Marmolada and from the Valle del Contrin which is instead located on the north side where among other things it is possible to admire the beautiful alpine lake of Fedaia.
The overall journey requires over five hours of travel both from one side and the other.

Trentino localities close to the Marmolada:
Within this extraordinary mountain group there are several valleys that are among the most popular destinations among tourists from all over the world, both in summer and in winter.
The most important valley present in the Marmolada is undoubtedly that of the Contrin which, as mentioned, is located on the north side and which in any case is considered part of perhaps the most famous Val di Fassa.
Among the inhabited centers that are part of this valley, Canazei and Pozza di Fassa are to be remembered and therefore to be visited. Finally, the valley extends for a total area of approximately 13.5 square kilometers and develops almost entirely in the province of Trento. Another rather famous valley of the Marmolada group is that of San Nicolò where you can admire the splendid waterfalls caused by the Rio di San Nicolò river.
Geographically it extends entirely beyond the municipality of Pozza di Fassa and therefore is located in the province of Trento.

The steps:
there are many passes and passes of the Marmolada among which the most evocative and known for various reasons as well as the beauty, are the Passo delle Selle, the Passo Fedaia and the Passo San Pellegrino.