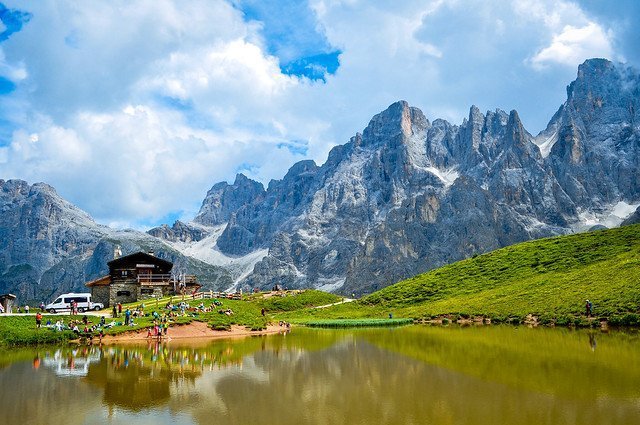 The Pale di San Martino, also known as the Primiero Dolomites or the Pale Group, are not only one of the most famous but also the most impressive group of the entire Dolomites.

The origin of the name derives from the term Pala, a noun with which the grassy slopes located on the slopes of the mountains were usually indicated. By extension, the word was used to indicate the entire mountain complex, receiving the addition of the geographical name of “San Martino” due to the proximity of the famous tourist resort of San Martino di Castrozza.

The most characteristic element of the Pale di San Martino is undoubtedly the Cimon della Pala, also known simply as Cimone.
Despite being overcome in altitude by the Vezzana peak (albeit by a few meters), the Cimone has natural characteristics such as to have made its angular and slender profile like one of the most famous peaks of the entire Dolomites.
It was precisely this peak that generated the first alpine tourism in the Primiero valleys, and this mainly due to the strong influx of English climbers towards the end of the nineteenth century.

Within the mountainous complex rises an imposing plateau, in the central sector of the group, which covers an area of almost 50 km² at an altitude between 2500 and 2800 meters.
The Pale plateau, almost hidden by the rocky walls that flank its extension, is accessible only once you have entered the mountain range. Once reached, its majesty takes on the characteristics of hollows, sudden climbs and deep cracks inside the rock; it is also crossed by a visible fracture in its middle, the Riviera Manna, which leads to a picturesque lake of the same name.

The rocky characteristics of the karst of the plateau led an English mountaineer, Leslie Stephen, to write that it was the “wildest and most sterile of deserts”; Cesare Battisti, on the other hand, described the San Martino basin as “the most superb amphitheater in the Dolomite Alps“.

Its lunar setting would also have inspired the famous novel by Dino Buzzati, a great lover of the Dolomite peaks, the Desert of the Tartars.