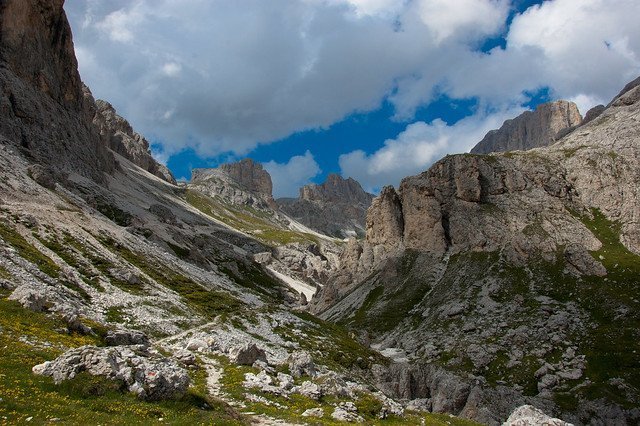 The beautiful mountain range of the Catinaccio (in German Rosengarten-Gruppe) is one of the best known massifs of the Dolomites, located between the Tires, d’Ega and Fassa valleys, within the protected area of the Sciliar Natural Park.
Within the Catinaccio group, some characteristic mountain spiers stand out, particularly appreciated by both climbing lovers and hikers: the Vajolet Towers.

The Vajolet Towers are made up of seven limestone spiers whose highest peak, called the Main Tower, reaches an altitude of 2821 meters above sea level.
Located in the central area of the Catinaccio, the suggestive spiers were conquered in the nineteenth century and are still today a fundamental tourist and mountaineering destination; in particular, the so-called Southern Vajolet Towers (i.e. the Delago Tower, the Stabeler Tower, the Winkler Tower and the Piaz Tower), are the subject of frequent sporting excursions thanks to the solid rock routes and their great exposure.

The most popular Tower it is undoubtedly the Torre Delago, which reaches an altitude of 2790 meters and offers numerous points of mountaineering interest (in particular for various passages with varying difficulty levels between IV, IV + and VI + A1); the same can be said of the higher Stabeler Tower, equipped with the easiest itinerary of the southern Towers (difficulty III +) as well as a normal ascent route. Of lesser importance, among the Southern Towers, are the less frequented Winkler and Piaz towers, which are however equipped with interesting and popular rocky routes.

As a tourist resort of great naturalistic value, the Vajolet Towers are equipped with shelters located at different altitudes and in various areas of the mountain range, including the Vajolet refuge (2243 m. a.s.l.), the Passo Principe refuge (2601 m. a.s.l.) and the Re Alberto refuge (2621 m. a.s.l.).