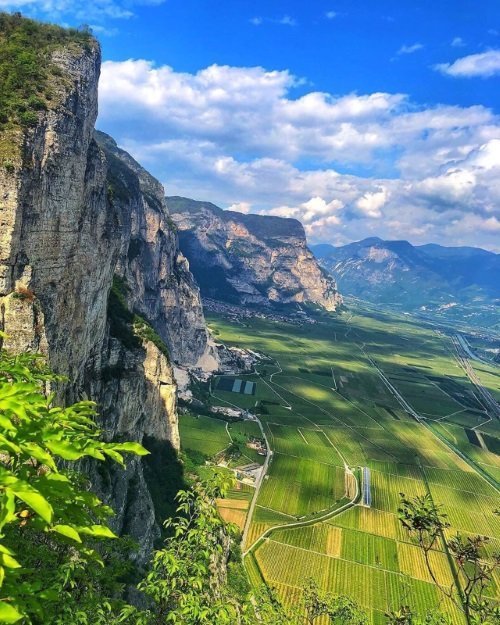 The first testimonies of man in Piana Rotaliana date back to the Mesolithic period (from 9000 BC to 6000 BC), in the area of Mezzocorona, in fact, have been found evidence of settlements dating back to that time, as well as a tomb in perfect condition, belonging to the “grandmother of Mezzocorona”, a female individual over the age of 30 deposed in this ancient sepulcher.

More numerous are the testimonies of the Copper and Bronze Ages, given the important position on the north-south axis between the valleys of Non and Cembra. Mainly funerary finds but also a bronze sword found in the bed of the Noce stream, which probably served as a gift to the divinity of the waters.

In Roman times it was crossed by the most important road towards the north of the empire: the Via Claudia Augusta, which started from Altino (VE) to arrive in Augsburg (D), following the Piave, the Valsugana, the Adige valley and the Resia pass.

In the Middle Ages, the Rotaliana saw the succession of various dominations: the Gothic kingdom, the Lombards, the Franks.
In 952 it was aggregated to Bavaria thus becoming part of the Germanic kingdom. From the year 1000 it was included in the Episcopal Principality of Trento, which lasted until 1803. The imprint of Germanic colonization is still present in the typical farm (or scattered) distribution of the houses in the municipalities of Faedo, Nave San Rocco, Pressano and Sorni.
In the nineteenth century the appearance of the Piana Rotaliana began to radically change thanks to the hand of man who corrected and diverted the Noce stream, the Adige river, enormous silkworm crops and then led to the more profitable viticulture. In 1859 the Brenner railway axis was created, in 1906 the feratèla from Mezzolombardo to Mezzocorona and in 1909 the Trento Malè tramway.

In 1920 together with South Tyrol it was annexed to the Kingdom of Italy, and in the Fascist era important reclamations were carried out in the Nave San Rocco area. After World War II we find a steady growth of the economy, driven by the wine sector which, together with industry, is still one of the main Rotalian economic segments. The Teroldego Rotaliano DOC is the master, a vine that gives us a ruby red wine, even with the ability to age, the true emperor of Rotaliana – Königsberg.

To visit absolutely: the Museum of Uses and Customs of the Trentino People and the Convent of the Franciscans with the adjoining church in San Michele all’Adige, il Königsberg Castle in Faedo, the Giardino dei Ciucioi in Lavis, Castel Firmian and Castel San Gottardo in Mezzocorona, the Castle of the Tower and Church of Santa Apollonia in Mezzolombardo.
To delight your palate, absolutely must try: the Teroldego risotto, the white asparagus of Zambana with eggs, the Potato Tortel with cold cuts and salted meat, the Smacafam, the Strangolapreti and the apple strudel.